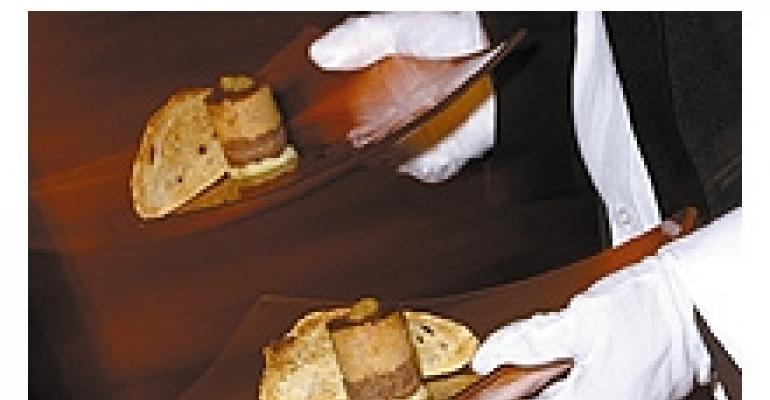 Susan Niemann, principal at Bethesda, Md.-based catering institution Ridgewells, notes that while traditional formal dinners are still very much in style, she's seeing more flexibility in both menus and presentation than in the past.

“For the most part, formal dinner events are changing to where they're a bit more creative in what's being served,” Niemann explains. “Even for formal affairs, if there's a theme to the event, then the client usually likes to take that theme and play off it for the menu.”

Informal dishes are also being upgraded for service at upscale events. “This season we introduced soft tacos — you think of tacos as filled with beef or pork and fairly casual, but we filled these with citrus-smoked salmon tartare,” she says. “That kind of thing is fun, and people enjoy playing off something that's traditional, but with a twist.” As for entrees, “We're doing a lot with quads,” she adds. “It used to be the dual entree or the trio of desserts, but now we're really pushing the four-part entrees.” The company has had such success with quad menus that “we've actually purchased a great deal of equipment specifically to complement the quad format,” Niemann notes.

For even the most upscale affairs, formal doesn't have to mean stuffy. That was the philosophy behind a dinner planned by the special events department of the InterContinental Houston hotel for top meeting planner and charity chair clients from the Houston event scene. The concept for the event was a “Diva Dinner” to introduce the hotel's new executive chef, Peter Laufer, and show off the capabilities of the hotel's catering and special event departments. “A lot of these guests had come to the anniversary events that we hold every year, so we wanted to make sure that we showed them something very different,” explains Kleibert Estrada, director of special events.

Invitations designed to pique guests' interest — including a chocolate high-heeled shoe inscribed with the message “Calling all Divas” — were sent to their homes to set the tone for the night. Guests started the evening in the chic hotel bar, where they sampled signature martinis and nibbled hors d'oeuvre of seared scallops, bruschetta and chilled prawns. They then moved into the hotel's fine dining room, which was filled with tables with light-up bases in rich jewel tones. Centerpieces of tiara and diamond ring ice sculptures, surrounded by dozens of multi-hued roses and cut-crystal candelabras, created a setting that was luxurious yet playful.

The six-course dinner was inspired by chef Laufer's life and career, explains director of catering Buddy Beaty. An amuse bouche of weisswurst served with a pretzel stick and sweet mustard sauce, paired with Erdinger Weiss beer, was a tribute to the chef's German origins. “It was a gamble,” Beaty says of the unconventional starter. “Behind the scenes we were a little concerned about how it would come off, serving beer and sausage for the first course at a formal dinner, but it was extremely well received and we're glad we did it.” A course of melon gazpacho, which surrounded a shell filled with conch meat, was paired with Lanson Black Label champagne. Buffalo Wellington with fresh chanterelle mushroom and truffle sauce paid homage to Laufer's new home in the West, while the dessert of warm Gorgonzola with pear and toast brioche was served “just because it was a personal favorite of the chef's,” Beaty says. Between courses, impersonators of various divas, including “domestic diva” Martha Stewart and “pop diva” Janet Jackson, added another irreverent element to the dinner.

The unexpected combination of formal white-glove service with the inventive decor and menu was a hit with guests, Estrada says. “It's rare that people are so excited about a dinner months later, but the guests are still talking about it and took away a lot of ideas.”

While there's always room for playful elements in menu and decor design, for one element of formal dinners there is no compromise. “Formal is formal, so you always have to make sure that the timing of service is perfect,” Niemann notes. “Service is absolutely key when it comes to formal dinners. For those meals it's definitely one server per table — 1 1/2 if the client can afford it.”

In November, Ridgewells catered the Dutch Intellectual Summit dinner for 80 guests, held at Washington's stately Library of Congress — the perfect setting for a formal event, she notes. The meal began with a plated seared-scallop salad with baby greens, port-poached figs and apples in balsamic vinaigrette, followed by French-served peppercorn-crusted beef tenderloin paired with roasted halibut, apricot-glazed roasted asparagus and potato-and-artichoke gratin. A plated dessert of chocolate and pear marquis with crunchy couverture and buttercream, laced with Poire William liqueur and served with slices of Zinfandel-poached pear in raspberry coulis, ended the meal. The white-glove service at the event reinforced a general trend she's seeing, Niemann says. “We used to do white-glove service all the time, and we seem to be getting a number of requests for it again.”