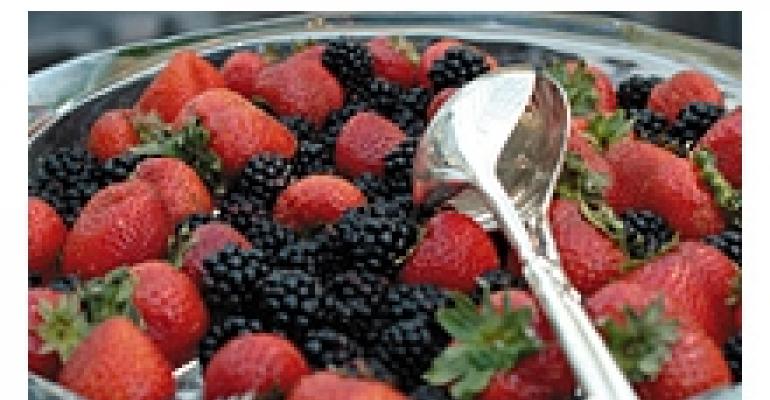 FOOD stations are the ultimate tasting menu, allowing guests to sample regional ingredients, a bride and groom's favorite dish or eclectic ethnic cuisines, all at a single event. And while delicious dishes are the top priority, the best stations serve up eye-catching entertainment as well.

The interactivity of action stations is one of the main attractions of the service style, caterers say.

“I think in the past the idea of an action station was a guy standing behind a table carving something,” notes Dory Ford, executive chef for the Portola Cafe and catered events at the Monterey Bay Aquarium in Monterey, Calif. Today, “People enjoy seeing how something is made. Instead of saying ‘I'll have a piece of that’ and having it put on a plate, they want to ask questions and learn something.” New offerings such as ravioli action stations show the process behind the final product. “We've got a great local pasta maker in the area — I'll tell them what kind of pasta I want, such as lemon-dill or tomato, and we'll make our own filling,” Ford says. “At the station we'll have the sheets of pasta and the filling; we'll cut the pasta, then stuff and cook jumbo ravioli in front of the guests.”

At Catering Works in Raleigh, N.C., “We've been doing wine and cheese pairings at a station, which is popular because we have staff there to talk to guests about the characteristics of the cheeses and how they pair with different wines,” says company president Jill Kucera. Stations that pair chocolate and wine are new options. “Darker, higher cocoa content chocolate is becoming very popular — we also have a gourmet market, so we have access to a lot of interesting things,” she says. “We get organic chocolate bars that are infused with different flavors such as chile or lime, and pairing those with wine has been a hit.”

Stations allow chefs to get creative with cuisine, offering favorite foods in miniature or creating dishes around a specific ingredient.

Barbara Llewellyn, president of Oakland, Calif.-based Barbara Llewellyn Catering & Event Planning, notes that comfort foods such as hamburgers have been big with clients. The company offers a mini-burger station where “we do the basic toppings because those are always requested, but we also do unusual toppings such as fried leeks, Cambozola and other artisan cheeses, and roasted peppers,” she says.

At the Monterey Bay Aquarium, “We used to do mini-pizza stations, but lately I've been doing a bruschetta bar,” Ford says. The station offers a dozen exotic bruschetta varieties, including roasted beets with ricotta salata, parsley root and chives; Taleggio cheese, rhubarb compote and aged balsamic vinegar; and oven-braised fennel with olive tapenade and white anchovies.

“Keying on a specific ingredient can be fun,” Ford says. “A client might say ‘I love crab,’ so we'll do a station of four or five items that use the ingredient, such as crab risotto, crab cakes, and wonton crisps with Dungeness crab.”

Stations are also an ideal way to introduce guests to regional cuisine in petite portions, so there's less waste if they don't like it. Catering Works serves small plates of local favorites — dishes such as classic Southern-style shrimp with grits, and grit cakes with spicy corn relish — at action stations.

Guests' dietary restrictions are a concern for event planners, but offering a variety of stations allows people to choose dishes that fit their diet choices. “Stations serving different kinds of deviled eggs, such as avocado-filled eggs and shrimp-stuffed eggs, have been requested recently,” Kucera says. “I think that's because people are watching their carbohydrates, and it's a way they can still have fun hors d'oeuvre.” She notes that the company is also doing a lot of tabbouleh and whole-grain salads. “People are definitely asking for more health-conscious items compared to the all-barbecue menus we used to do.”

Dessert, though, is one area where people are still willing to indulge. “We do a station serving both savory and sweet crepes that is very popular as a dessert station,” Lewellyn notes. “Guests can fill the crepes with items such as fruit, chocolate or raspberry sauce, and whipped cream.” She offers one caveat about serving such crowd-pleasing fare. “When you hit on an item that people love, it can be agonizing if they have to wait in long lines, so it's important to have enough stations to accommodate the guests,” Lewellyn says. “For each station I do, I typically don't plan on serving more than 75 to 100 people at it because you just can't keep up — you want to make sure everyone gets served.”