/sites/all/themes/penton_subtheme_specialevents/images/logos/footer.png
Recent
Recent
You're the Expert
Sep 17, 2021
Who's News in Special Events for September 16, 2021
Sep 16, 2021
What You Need to Know About the Wedding Boom and How It's Impacting the Industry
Sep 14, 2021
Vanquish the Villains on Your Entrepreneur Hero's Journey
Sep 13, 2021
Time's Running Out to Speak at Catersource + The Special Event!
Sep 10, 2021 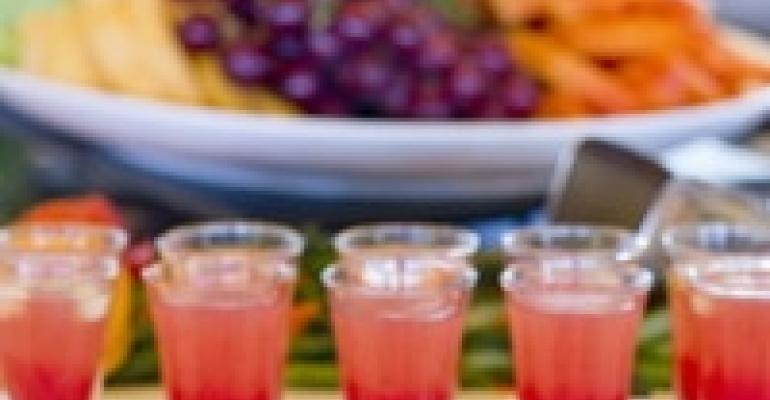 Living and working in California has its obvious advantages — chief among them the nearly year-round access to fresh produce, local seafood and artisanal cheeses. “The public is looking for more value and quality, and less complicated” dishes, says T.B. Collins, executive sous chef, InterContinental Mark Hopkins. “They want to see what they're eating, so we have to focus on the freshness of our ingredients.”

That said, it's no surprise that fresh fruits and vegetables make a strong showing in his summer buffet dishes.

Collins suggests grilling summer fruits such as peaches, plums and nectarines to release their natural sugars and create new flavor profiles. For example, Anjou pears are grilled and served with shaved speck and Parmesan as a sweet/savory salad. Collins also favors fruit compotes, relishes, caviars, chutneys and fumets over heavy sauces as accompaniments to his summertime main dishes, such as pork butt slow-braised in a combination of pureed watermelon, oranges, smoked Spanish paprika and smoked chiles. “These less common, sometimes tougher cuts of meat — such as short ribs, cheeks and shank — are easily made amazing with a little patience, creativity and, of course, time,” he says, noting that fruits and fruit juices are natural tenderizers.

Lighter side dishes — specifically those made with unusual, super-healthy grains such as quinoa and forbidden black rice — are a preferred starch option. Collins also recommends using grains, specifically red quinoa, as a healthier, crispier alternative to bread crumbs or seasoned flour when coating fish or lean meats.

Lighter often means less, which means small bites are even bigger in the summer months. “We are incorporating the small-plate concept into our buffets, which takes advantage of local seasonal ingredients,” says Peter Betz, executive sous chef at the Waldorf=Astoria. His summer buffets feature small individual portions of summer-inspired fare with a unique, unexpected twist. (This is New York, after all!)

For example, summer staples such as watermelon and tomatoes are given their culinary props when they are combined in a salad with red onion, fresh mint and feta cheese. “Chilled shooters have also become very popular for summer,” says Betz, citing his yellow tomato gazpacho shooter with sugarcane-skewered prawns as a summer favorite.

Presentation also takes on a lighter, more minimalist look, with emphasis on the art of the food. Betz and his team present dishes on variously shaped small plates, soup spoons and cocktail glasses accented simply yet dramatically with glass votives — letting the colorful, fresh food speak for itself.

Ciborowski and his team have developed some very innovative ways to put the chill factor into their summer buffet fare. “Some of our more unique cold items include our ‘nitro’ kettle corn, where we use liquid nitrogen to super-chill popcorn and honey-roasted peanuts with caramel foam, as well as our frozen-to-order mini ‘lollipops,’ which we make on our anti-griddles.” (An anti-griddle is a traditional cooktop with a twist: It quickly freezes sauces and purees instead of heating them.) Savory frozen gazpacho lollipops made with heirloom tomatoes are on this summer's menu, as are bite-sized “salads” of chilled compressed melon and lump crab with an ice-wine vinaigrette.

Because some dishes are better served hot, even in warmer months, Ciborowski and his team rely on another cooking device — the Gastrovac — to give foods big flavor with less cooking time. “Think of the Gastrovac as a crock pot, vacuum pump and heating plate all in one,” Ciborowski says. “The low-pressure environment pulls all the air out of the food, such as a piece of fish, compressing it like a squished sponge. Near the end of the cooking process, the food item is dropped into a savory broth and pressure is restored. The liquid rushes into the cells, infusing them with flavor.” Ciborowski prepares a dish of halibut, heirloom tomatoes and olives using this method, which, like the anti-griddle, can be used at an action station. “Our guests find them both to be quite interesting and conversational,” he says.

And since summer wouldn't be summer without barbecue, the resort's signature “Cib's Smoke Shop” remains a seasonal mainstay — and perhaps the most in-demand of all its summer buffet options. “The barbecue concept is approachable, understandable and packed with a variety of flavors and selections,” Ciborowski says. To insure quality, all meats are smoked, rubbed and marinated in-house.