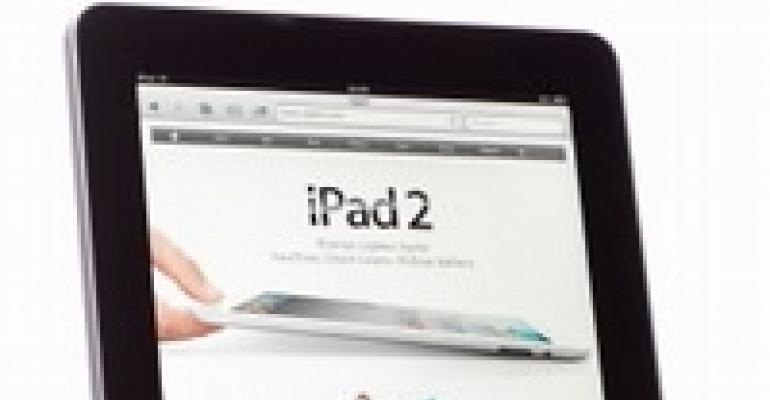 Event Rental Parties on with iPads

The iPad wasn't invented to help party rental &#8212; but for some operators, it might well have been.

There's no evidence to suggest that the Apple iPad was invented specifically to help the party rental industry. But judging by the enthusiastic fans that the tablet computer has won in rental, you might think so.

A lot of big computer companies — Dell, HP, Samsung — make tablet computers. But for Steve Kohn, president of Miller's Rentals of Edison, N.J., none beats Apple's iPad. “There is no better, period,” he says flatly. “No rental person should be without it.”

Since the iPad weights a scant 1.3 pounds, it spares on-the-go event professionals from having to lug a laptop computer on their rounds. And while it's light in weight, the iPad is heavy on hip.

“It really makes a statement about you and your company,” Kohn says. “Being on the cutting-edge is so important.”

Where the iPad shines, the majority of party rental pros say, is its ability to share a wealth of event photos and product information with clients.

“I love my iPad,” says Kathy Newby, senior event consultant with the Sacramento office of Classic Party Rentals. “I have downloaded all my portfolio photos and product catalogues onto it, instead of carrying a 10-pound three-ring photo binder to client appointments.”

Along with displaying photos, Newby relies on iPad apps. “I use a drawing app with a stylus for taking notes,” she explains. She also downloaded Google Earth for quick diagramming and measuring assistance at client appointments.

Damon Holditch, CSEP, CERP, says that what his iPhone did before, his iPad does better. “The iPad has a bigger screen,” the founder of Austin-based Marquee Event Group says. “It is easier to read emails on the iPad.” He now also reads the daily news on his iPad, a benefit he didn't expect.

Although he had his company buy his iPad as a trial, Holditch is now sold on the product. “Marquee will probably purchase one for all our outside salesmen this year,” he says.

“We load floor plans on our iPads and use them on-site when setting events,” Weiner notes. “This allows us to make changes and email them to everyone's iPads, so all parts of the production team can be on the same page instantly, even if we are working in different buildings.”

PAINT ME A PICTURE

IPads bring out the artistry in the team at Pittsburgh-based linen rental company Mosaic.

Thanks to its WiFi capabilities, the iPad enables the Mosaic team to visit clients and show not only items on the Mosaic website but also products from other vendors' sites, explains owner Susie Perelman. Further, the iPad gives the Mosaic team some CAD (computer-aided design) capabilities, a sketchpad app to rough out ideas for room spaces and party flow with the client, and the ability to pull up color palettes online, which helps determine how a specific palette looks in the client's venue.

Perelman also relies on the iPad to support Operation Outreach, the charitable foundation she recently launched.

“We selected our website format — Wordpress — knowing the rise in smartphone and iPad users in the industry,” Perelman explains. “We wanted our supporters/viewers to be able to access our site while out in the field, so the site was created without Flash [Adobe Systems software to view video, which Apple blocks] and other high-tech plug-ins.”

NOT QUITE A COMPUTER

The one complaint shared most commonly by rental's iPad users is that this tablet computer still isn't a computer — at least when it comes to running workhorse programs such as Word and Excel.

“A notepad — which iPad currently offers — is good, but Word documents and Excel spreadsheets would be better,” Perelman says. She notes that documents can be shared via the “Google Docs” interface, “but that requires WiFi to get in and takes extra steps.”

Holditch complains that he is slowed down by having to use the iTunes interface. “I would like to be able to upload photos directly to my iPad from my Canon SX130. Now I have to upload to my computer, copy to iTunes, and sync with my iPad.”

Similarly, John Bibbo Jr., the head of Cleveland-based Event Source, calls his iPad “the best piece of technology” but wishes it could organize photos better. Bibbo would like to be able to “sort and file photos into different files without an additional app,” he says.

But in the eyes of iPad fans, its kinks are far outweighed by its virtues.

“IPads are the future,” Holditch says. “We will all have one soon.”