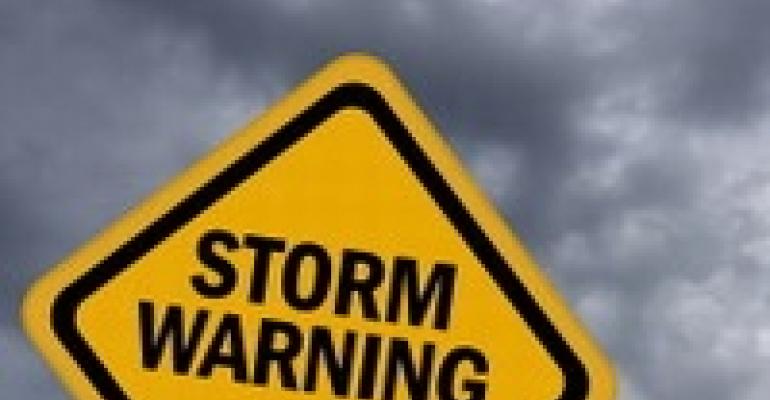 Event rental companies have time to warn clients--but some clients will pay any price for the party.

While warnings that Wall Street might wash away never came true, Hurricane Irene doused the U.S. East Coast over the weekend, leaving party rental companies to grapple with power outages and event installations endangered by the storm.

As of yesterday, primary power was still out at the Stoughton, Mass., headquarters of Rentals Unlimited, leaving the company to rely on a backup generator, management said.

Thanks in part of extensive news coverage of Irene before it made landfall on Saturday, rental operators had time to warn clients, who postponed their events.

"We had only four events on Sunday when the storm hit our area, and they cancelled ahead," reports John H. Crabbe Jr., president of Vermont Tent Co. of South Burlington, Vt. He lost no inventory because "we got all events down by the time Irene hit."

Kohn tells a similar story. "Most events were cancelled, and every tent we had up, we made arrangements to take down," he says. But getting every event back up has been a chore: "We have been working nonstop since Monday morning," Kohn says. "We should have everything back up by [today]."

LOSE SOME, WIN SOME

On occasion, inventory such as generators and temporary structures can land extra business for event rental companies during disasters. But it seems Irene took more than she gave.

Vermont Tent Co. picked up some extra business from customers to whom it has sold tents by taking the tents down in anticipation of the storm and putting them back up. But Crabbe's team invested a lot of time warning clients about the coming storm.

"The hardest part was all of the phone calls to customers to warn them," Crabbe says. "We spent many man-hours making calls to explain what could happen if they did not heed the warnings." Further, "Labor costs were up because we had a lot of overtime to get everything secure in a short time," he says. "Some crews worked from 10 p.m. Saturday till late Sunday."

Kohn says the Irene weekend "was a major weekend of lost revenues." His company did rent some of the diesel generators used to power lighting on his tent installations, but this revenue "did not cancel out the losses incurred."

Kohn and his team also spent much time warning clients that the coming storm—advice that some clients did not want to hear. Although most of his tent clients agreed to Kohn's offer to drop their tents, one waited till less than 12 hours before the storm to take action.

THE TENT AT ANY PRICE?

Ominously, Kohn reports that some tent colleagues in the New Jersey area received calls from clients offering to pay them double if they would put up tents for them after other tent companies cancelled the installation.

"Never mess with Mother Nature," Kohn says. "If a hurricane is coming your way and your equipment is in its path, get out of the way. Period."

Masters of Disasters: How Event Rental Companies Cope with Disasters