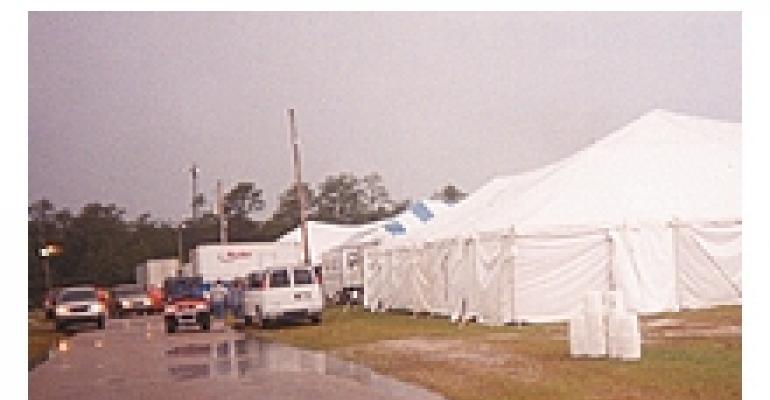 IT'S no party, that's for sure. Yet the tents and generators that shelter guests at fancy weddings have at many rental companies been providing vital shelter in areas devastated by hurricanes Katrina and Rita in late summer.

Tucson, Ariz.-based Prime Event Group has been providing tent structures, climate control, lighting and power to various hurricane relief efforts and to clients including major oil companies working to get their refineries back online, notes sales manager Murray Hamilton. Terms of its contracts prohibit sharing specific details. “We have had crews in the Gulf Coast since the hurricanes and believe these crews will be there for the next six months at least,” Hamilton explains. The structures are being used for multiple purposes including housing, recreation areas, kitchens and storage.

CAN YOU HEAR ME NOW?

The major initial challenge after the storms: communication. “Cell phone service was very sporadic,” Hamilton notes. “We ended up using satellite phones until better cell phone service was reestablished.” And despite the obvious need for its structures and equipment to move into the blighted areas, “Moving large amounts of equipment around was very tricky,” he adds. “Fortunately, FEMA [the Federal Emergency Management Agency] issued letters to our truck drivers relaxing some of the regulations on weight allowances, etc.”

By early September, Frederick, Md.-based Signature Special Event Services had deployed 100 percent of its available event rental equipment to the Gulf Coast. Tom Brown, company president, announced that the company had seven emergency response teams at work in Louisiana, Mississippi and Alabama, noting, “We have every one of our generators, tents and mobile kitchens in use or on the way.”

In the wake of this year's hurricanes, Houston-based Aztec Party and Tent Rentals has created tent cities for work crews in Louisiana, Texas and Mississippi for clients including FEMA, local government agencies and local power companies. The largest housed 2,500 workers, notes director of sales Ronnie Howell.

Although Aztec has a division for industrial and commercial events, “Our No. 1 goal is serving the local event market with high-profile corporate events and weddings,” Howell notes. Hurricane Rita did little true damage in Houston, but the mandatory evacuation of residents played havoc with event schedules. Juggling relief work with postponed events meant “no days off, 20-hour workdays” for the Aztec crew, Howell explains. “Our crews slept in the tents they were putting up.” The work sites can be chaotic: “You don't know what's where — if a forklift or a drain is available,” he says. “There is a lot of ad-libbing.”

Although relief work can be lucrative because the structures and equipment stay in one place for a time, suppliers must be cautious. “You are putting a lot of assets out on the street, and you may never see them again,” Howell notes. Clients may come begging for help, “but they may not have security, insurance or funding,” he cautions. “You have to make sure there is some money out there.”

Not all hurricane relief work has been taking place in hurricane country. Lanham, Md.-based Hargrove Inc. has been busy farther north creating housing for 300 Katrina victims at the D.C. Armory in Washington at the request of the city's mayor and convention and visitors bureau. The company supplied 700 linear feet of pipe and drape along with 5,000 square yards of carpet and miscellaneous signage, donating the materials with a one man-day installation over Labor Day weekend, according to Hargrove marketing director Marvin Bond.