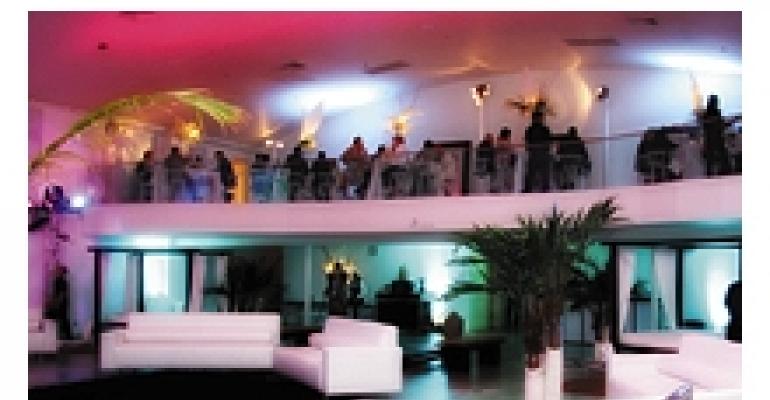 MIAMI is known for many things: international cuisine, sizzling beaches and the trendy South Beach club scene. It was the club vibe that her client, a New York-based private equity investment firm, sought for a mid-May company party for 50 employees, notes Fé Domenech, senior executive events producer for Pembroke Park, Fla.-based ME Productions.

With the event's month-and-a-half lead time — “which lately is a lot,” Domenech laughs — finding a site that would satisfy the client's desire for exclusivity for the Saturday soiree turned her into a location scout. By contacting colleagues and former coworkers, Domenech tracked down an unconventional venue: a former Jewish temple converted into an enormous single-family residence during a two-year renovation that ended in January. “It's a private home that's not normally open as a venue — I basically talked the owner into letting us do an event there,” she says.

Loading in equipment in the upscale neighborhood posed a new problem. “Normally we would load in all at once, but I had to scatter the load-ins because it was a residential home,” Domenech notes. “We were very aware of our surroundings to make sure we didn't disturb the other residents.”

Once inside, Domenech and her team set to work making over the home's minimalist interior into a luxe nightclub. The 6,000-square-foot living room, with its second-story mezzanine surrounding the perimeter, provided a perfect club-sized event space. “When the owner converted the property, he retained the open design instead of chopping it up into smaller rooms,” Domenech explains. With such Miami hot spots as the Delano Hotel and Bed nightclub as inspiration, the team brought in all-white furniture including plush sofas and beds; vibrantly hued lighting added to the club vibe. And while her budget was generous — “For those 50 guests, the company spent about what I would normally spend on a group of 100,” she says — with the owner's permission Domenech incorporated some of the home's furniture into the design instead of moving it into storage.

On event night, the VIP guests sipped cocktails on an outdoor terrace before going inside to dine at tables set up on the mezzanine. “While guests were eating dinner it was if they were at a theater — they were looking down on the band playing [in the living room] below,” Domenech recalls. Following dinner, guests moved downstairs for cordials and dessert, then danced to live music and tunes from a DJ. The ambiance hit the design notes the client wanted, she says. “It was a very cool, but very comfortable, club scene.”