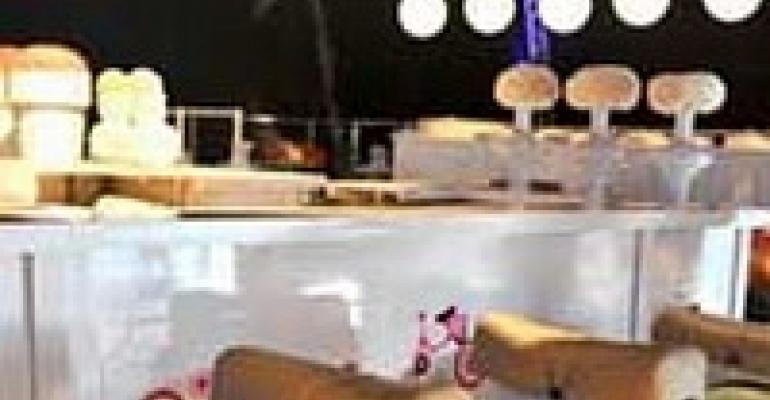 A 1960s-style Wedding Gets its Groovy On

When faced with creating a '60s-themed wedding for a famous fashion model and her high-end retailer groom, Israel-based event producer Koby Bar Yehuda debated between two distinct visions of the era: Woodstock hippie or British Invasion mod. “The bride came with a rough idea of the '60s, but couldn't decide which way to go,” he says, noting that she also wanted the elegance of a formal affair. Ultimately, the designer opted for a hip, less obvious look that was decidedly more Twiggy than Janis Joplin.

The next challenge was the space — the Dome Fairgrounds in Tel Aviv — essentially a huge hangar chosen to accommodate the 1,000 guests. To add intimacy, Bar Yehuda divided the space into two main areas — one for dining and one for a nightclub — with a small outdoor cocktail area. Rather than a sit-down dinner with assigned seating, Bar Yehuda, working with local caterer Paul Assenheim, decided to create a series of restaurants within the main part of the space, with seating throughout so that guests could eat wherever they wanted.

A predominantly white color scheme accented with pastel-patterned dividing walls and sheers created a perfect palette on which to build the mod '60s theme. Monochromatic floral in abstract shaped containers was accented with accessories of the era — metal belts, leather string bracelets and headbands. Each restaurant — Asian, seafood, French bistro, tapas bar, deli and an ice cream parlor — featured small-plate action stations. “We had safety and security limitations regarding live cooking in the hall,” Bar Yehuda notes. “So, we placed each food station on the perimeter of the space with a direct connection to an exit door, where the actual live cooking was done nearby. The building of the plate was then done in front of the guests.”

Each restaurant also featured a specific '60s look, which incorporated everything from faux grass flooring and inflatable furniture in the Asian restaurant to pastel Vespa scooters, which were cut down and attached to the counter as seating in the Italian ice cream parlor. A variety of seating options — lounges, tulip chairs, banquettes, cocktail tables — were all custom-made for the event.

After guests enjoyed mingling and dining, a '60s VW bug rolled into the dining space and, with a pulsating drumbeat, led the guests to the nightclub, which was separated by a black curtain. The nightclub, designed in all-black with fuchsia lighting and accents, featured a late-night deli serving up sliders, mini Reubens and other fast food fare. Bar Yehuda notes, “It was a constant challenge to keep the balance between a theme event and a wedding that was elegant and chic.”