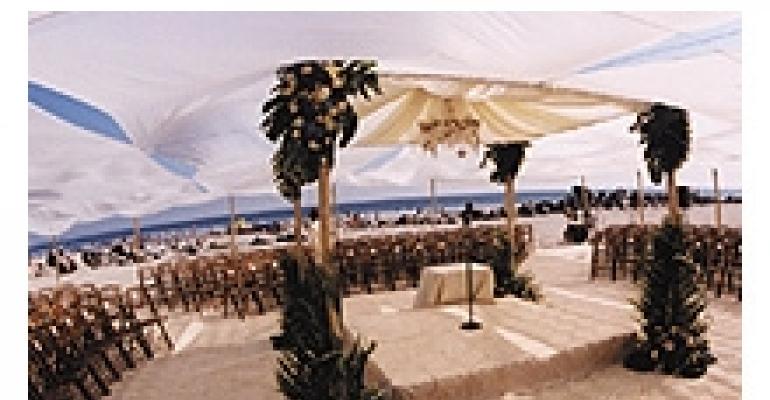 Beach weddings are often casual affairs: a simple ceremony on the sand, a few floral arrangements here and there. But a Gala Award-nominated 260-guest wedding reception from Coronado, Calif.-based Coronado Weddings was no ordinary beach wedding, notes company partner Victoria Schroeder. “The bride wanted the beach to have a ballroom feel, and the ballroom to have a beach feel,” she explains.

While the bride wanted to hold the wedding ceremony on a section of beach near local landmark the Hotel Del Coronado, she didn't want guests, a few of whom were elderly, to have to trudge through the sand. “We wanted to do something elegant, but [the bride] didn't want a tent,” Schroeder says. Enter the team from Coronado Weddings' production partner, San Diego-based Pacific Event Productions, which designed a 60-by-60-foot square deck with a raised center platform. The design produced an “in the round” effect that allowed guests a clear view of the ceremony, while adding bamboo mat floor covering to the deck and a seashell chandelier to the overhead canopy gave the structure a more formal look.

Following the service, the party moved inside the hotel's ornate ballroom for the reception. “If the couple could have had everything outdoors, they would have,” Schroeder explains. “But they didn't want to deal with the 10 p.m. end time required by local noise ordinances.” Creating a beach scene inside the hotel posed its own set of challenges. “The Hotel Del Coronado has a really classic feel to the ballroom, so we wanted to erase that and bring the whole room ‘outside,’” she says. The design called for bringing in natural materials, including a bamboo arch entryway and bamboo-covered stage proscenium, that echoed the materials of the ceremony deck. Decor elements such as miniature glass bottles filled with seat assignment “messages” for guests and tables covered in ecru burlap linen with floral and seashell centerpieces added seashore chic to the space. Even the sandcastle-shaped wedding cake and the cake table, which was a smaller version of the outdoor canopy, reinforced the beach theme.

Perhaps the most extraordinary element was the room's lighting, which re-created the undulating movement of the ocean and sky on the ceiling and walls using colored intelligent lights and gobos. “The effect was amazing,” Schroeder says. “It was a theme wedding, but we were able to formalize the look of a beach party into an elegant event.”