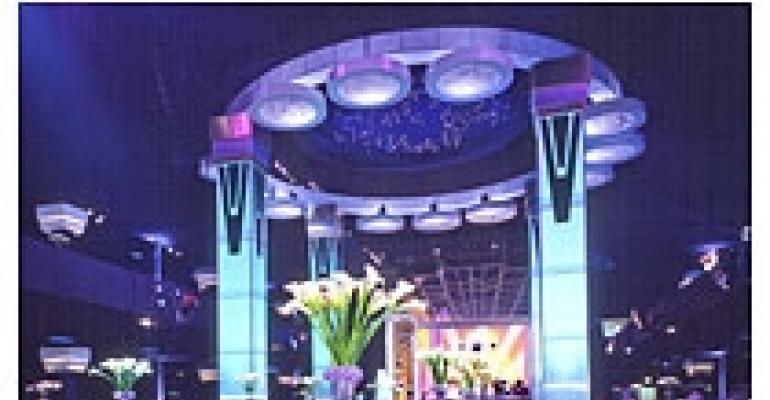 Some 2,800 guests at the Emmy Awards Governors Ball last week sailed away to an art deco dream thanks to the team headed by Cheryl Cecchetto of L.A.-based Sequoia Productions (www.sequoiaprod.com). This year's Emmy gala was one of four events produced by Sequoia during Emmy week--hosting a total of 6,750 guests,--and the eighth straight ball for client Academy of Television Arts and Sciences.

The stunning art deco look—created with strong diagonal lines and a dramatic palette of indigo, silver and gold—sprang from the vision of ball chairman Dwight Jackson, an art director. Using the 1930s ocean liner S.S. Normandie as inspiration, the design team refashioned L.A.'s venerable Shrine Auditorium (www.shrineauditorium.com) into a luxury cruise ship via massive mirrors hung on the walls and above the stage, huge illuminated columns, and zodiac disks suspended from the ceiling.

The look was less about a theme than about dramatic impact. Art deco "reads so well," Cecchetto tells Special Events Magazine. "It's one of the nicest eras to light, and it's an era everyone gets." That's important for keyed-up Emmy guests coming straight from the ceremony: "They become part of the environment as fast as they possibly can, so they displace the stress of not winning or the traffic, and so on."

Rectangular and circular tables were dressed in custom linen; Cecchetto prefers to offer something never before seen because her guests attend so many galas. Topping tables were huge mirrored vases brimming with callas, white roses and hydrangeas, alongside candles embellished with art deco motifs, all the creation of Sherman Oaks, Calif.-based Mark's Garden (www.marksgarden.net).

Along with the decor, Cecchetto credits the high level of food and service from L.A.-based Patina Group (www.patinagroup.com) with wowing Emmy guests. "Patina did an awesome job this year," she says. "I don't care how many times you've done a sit-down dinner for 3,000—they really hit the mark." The menu (see below) keyed on dishes popular in the '30s, but with a decidedly hip spin, such as refashioning Escoffier's famed Peach Melba with peach panna cotta in place of the traditional ice cream.

While pulling off Beef Wellington for a big banquet is daunting, Cecchetto says the secret is not to treat the meal as a banquet. To ensure restaurant-quality service, she handles each table as its own party. "I send my personal managers to each table to ask if they need anything," she explains.

Although the Shrine, in operation since 1926, is hardly a cutting-edge venue, Cecchetto sees plenty of advantages in working there. "Give me a big open space," she says, adding that Emmy guests walk only 20 feet from the show auditorium into the event space, a rarity in Los Angeles. She also praises the work of Shrine staff and operations manager Andy Stamatin. "He's a doll!' she says. Her only wish: "I would like a bigger office there," she says with a laugh. "Mine is next to the men's restroom!"

Indeed, loyalty to her event partners--such as Jeff Williams of Classic ("Jeff has been with me for eight years; working with someone else would be like me choosing a new husband")--is one of Cecchetto's guiding principles. While she makes it a point to visit with potential vendors every few months, she trusts the rapport she has created with event pros. With Williams, for example, "We look at each other and know what works and what doesn't," she explains. It's all about teamwork, she emphasizes. "I'm the one doing the talking, but I have a clear understanding about the team and teamwork between the Sequoia Productions team and our vendor team," she says. "If a situation arises, we all work to unravel it."

She also has high praise for Sequoia's own pros--including production team leaders Dennis Lumpkin and Yunmi Park--"It takes them to make these events happen."

Sticking with many of the same vendors does not mean she gets stuck with big bills. She won't disclose budget figures, explaining, "I'm the barter queen. Imagine what you think we spent, then cut it in half." For example, she hired hot Australian vocal group the Ten Tenors to entertain at the Emmy bash when they were already on their U.S. tour.

Her concern for her client's budget is only part of her approach to taking over their worry list. "Our job as event producers is to treat every category as important," she says. While her art director committee chair was most concerned with the decor, "Having credentialing right and the dumpsters arrive on time is just as important," she notes.

Patina's Supper for the Stars