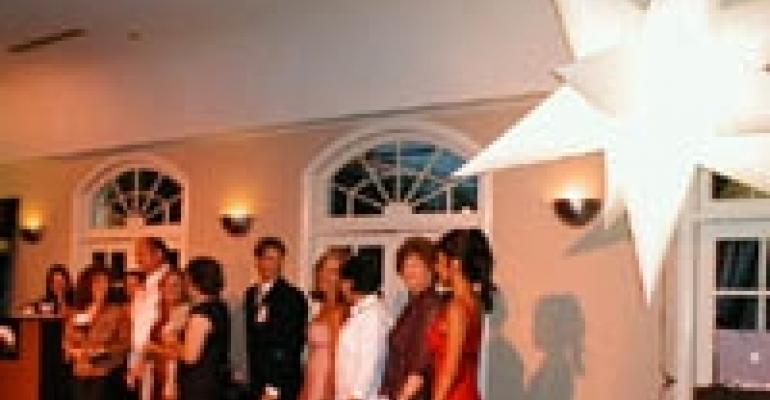 The Los Angeles Chapter of ISES announced its new board members at the annual installation and awards dinner, held at Paramount Studios in Hollywood, Calif., on Wednesday night. The studio’s full-service Special Events Department has recently reopened for private events, and the venue has a wide range of event spaces available, from a 20-guest-capacity private dining room to the 5 ½-acre, open-air “New York Street” set, which can accommodate 5,000 for receptions.

The nearly 100 guests in attendance were invited to take a tour of the studio lot during the cocktail reception, which included such tray-passed hors d’oeuvre as prosciutto-wrapped shrimp on rosemary skewers, scallops with ginger, sun-dried tomato, plum sauce and shiitake mushroom tapenade, and crostini topped with fresh green pea puree, morel mushrooms and shaved Asiago cheese.

During the installation ceremony, 2003-2004 president Ilona Hobbs welcomed new president Ronnie Jayne of A Song for You Productions. The other members of the ISES-LA 2004-2005 Board of Directors are:

After the swearing in of the new board, guests dined on a first course of gazpacho followed by an entrée of Chilean sea bass served with roasted butternut squash, beets and white asparagus. A dessert station offering a selection of coffee, apricot galette, poached pears in cabernet with crème anglaise and banana tarte Tatin with hazlenut ice cream made for a sweet ending to the meal, which was provided by Paramount’s Special Events catering department.