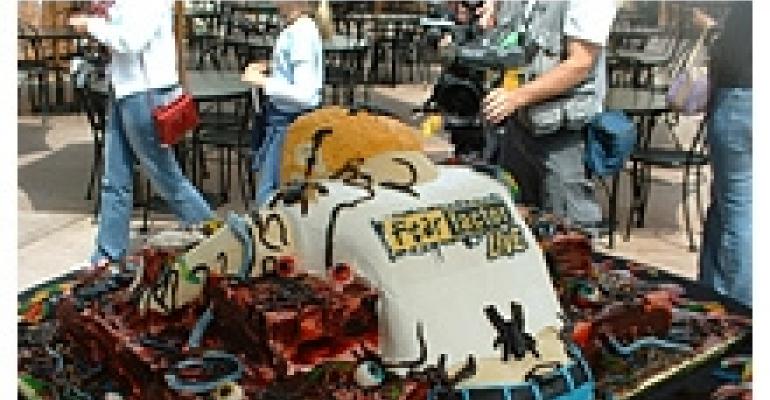 Thrills, chills and a dose of “yeech”—all ingredients of the June 9 party to celebrate the new interactive “Fear Factor Live” at Universal Studios Hollywood (www.universalstudioshollywood.com); it opened to the public on Saturday.

The attraction is based on the TV reality show, which subjects volunteers to physical stunts--which usually include eating spiders and other revolting morsels—to see who lasts longest. The show airs on network NBC, sister company to Universal. The attraction is also open at Universal Orlando, Fla.

With 200 guests on hand, including newly elected L.A. mayor Antonio Villaraigosa, the party kicked off with two stuntmen, engulfed in flames, traversing a 1,000-foot high-wire above the crowd in the park. The winner shook hands with the mayor while the loser munched on a particularly large insect.

Party-goers also saw a preview of the attraction—a theater setting where volunteer contestants take the stage to complete three stunts in 30 minutes.

Universal is positioning the attraction as a feature for special events and meetings involving team-building. Audience members can get in on the act by blasting contestants with water and air. They can also spin the “Wheel of Fear” to confront their own phobias. The attraction will have an irresistible lure for most who toil in the corporate world--“Where else can you hang the boss in a harness?” asks Evelyn Taylor, director of special events and convention sales. “The addition of ‘Fear Factor Live’ further positions Universal Studios Hollywood as a dynamic event venue offering clients endless opportunities and themes for party planning.”