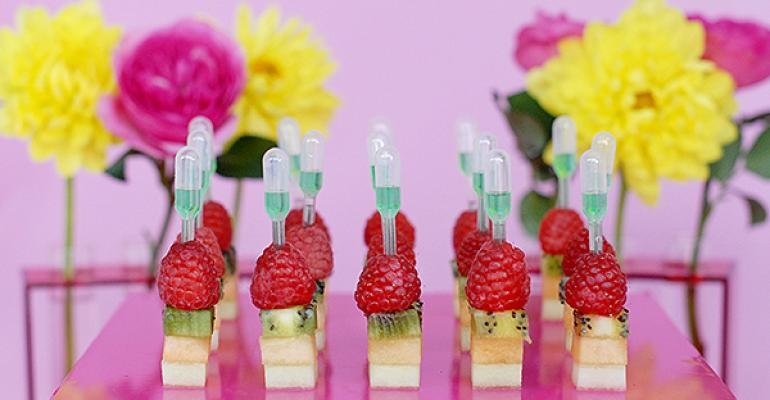 The great divide between menu choices for adults and kids is gone. Today, events offer fantastic food for all ages.&nbsp;

The great divide between menu choices for adults and kids is gone. Today, events offer fantastic food for all ages. Straight-from-the-steakhouse steak, or how about a ramen station?

OF STEAKHOUSES, SUSHI BARS Twenty years ago, when Marcy Feldman, director of catering for Thousand Oaks, Calif.-based Cielo Catering and Events, began catering mitzvahs, menus were all about chicken fingers and cheese pizza.

But today, “That type of menu has become almost obsolete,” Feldman says. “Kids are becoming more interested in eating different, more upscale foods, which has resulted in creating menus where everyone is welcome to eat everything.”

“It isn’t often a client will step out of the box for a kids party with an entirely ethnic menu," adds Heidi Brice, director of catering for Orlando, Fla.-based Puff 'N Stuff Catering and Events. "However, they may incorporate a popular ethnic dish such as pad thai or sushi that kids have become acclimated to.”

Robin Selden, executive chef of Stamford, Conn.-based Marcia Selden Catering and Events, agrees, noting that Italian, Mexican and “retro American” are tops with teens, but definitely not the dumbed-down kid’s restaurant menu versions. “We have found that in our neck of the woods—the New York City metro area—kids have very sophisticated palates and are very willing to try different preparations of foods beyond the obvious,” she says.

A Latin fusion rice bowl and taco station featured three kinds of rice dishes, and soft and hard tacos with grilled mahi mahi, beef, chicken and veggies along with house-made salsas and guacamole. A ramen station with assorted wok-fried veggies, dim sum and a sushi bar completed the dinner options. “Not only did this work beautifully, but the kids felt very special since this was the first mitzvah where they were not put into a separate room and served chicken fingers, fries and mozzarella sticks.” (Yes, it’s good to be the kid of a caterer!)

KID FOOD, REDUX At Puff 'n Stuff, Brice finds that comforting kid-friendly fare appeals just as much to adults as the kids for whom it is created—especially at the hands of a creative caterer. “While we usually offer separate stations for kids and adults, we have found that the adults really love the kids’ food,” she says. No surprise--when those stations include a mac and cheese bar with add-ins such as shredded braised short ribs, crisp roasted chicken, and creamed broccoli.

The full story appears in the summer issue of Special Events. Not a subscriber? We can fix that; just click here.