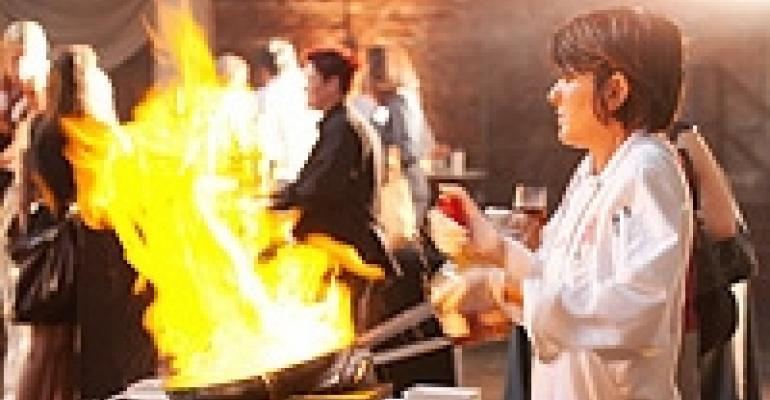 A Caterer's Food Forecast for 2013

On the way in: “We predict that one of the biggest food trends will be ‘cooking from the larder’; in other words, taking ingredients when they are in season and curing, canning or saving them in a way that allows you to use them year-around,” says president Mark Michael, citing house-preserved items such as pickles and cold-cured and smoked fish as examples. “We're going to see more playful cooking techniques, such as aromatic steaming, pickling and smoking.”

Indeed, such preparations lend themselves well to another emerging culinary trend: Scandinavian/New Nordic cuisine, which Michael attributes to the prestige and popularity of Copenhagen's renowned Noma restaurant. “Nordic foods will be all the rage in the mainstream,” he predicts.

As far as ingredients go, Michael sees nontraditional grains — spelt, faro, barley, teff and exotic rices — becoming more prevalent, as well as greens, namely beet, mustard and turnip, in addition to the already popular kale and chard. As for meat, “nose-to-tail pork will still be in vogue, with less focus on bacon,” Michael says. Finally, sustainable fish will continue to top seafood menus. “People are beginning to understand the concept of sustainable seafood, and are becoming more comfortable with alternative fishes such as barramundi or bluefish.”

Still going strong: Plates are still small and, according to Michael, aren't going to get much bigger any time soon. “We'll still see Spanish tapas, but we'll also see small plates inspired from Japanese izakayas, or Japanese bar food,” Michael says. The ever-popular interactive chef stations will continue, with a definite emphasis on customization. “Our steak tartare station is a great example of this,” he says. “Guests are able to customize their tartare to order and watch the chef prepare it as well.”

On the way out: “The market is completely saturated with miniaturized comfort foods and desserts on sticks, such as lollicakes.” Michael says.

DOUBLING DOWN ON DOUGHNUTS

On its way in: Being geographically specific, according to chef Todd Annis, will be the focus of 2013. “Instead of the generic Asian theme, the menus will be developed with a greater geographic focus and will be more drilled down to regions, specifically Thailand and Vietnam,” he says. For dessert, Annis predicts doughnuts, in various forms and preparations, will gain popularity. “We have created a ‘Doughnut Went Down to Georgia’ station where we flambé a Krispy Kreme doughnut in Maker's Mark whiskey and serve it with warm with vanilla ice cream, Coca-Cola syrup and a praline garnish.” And finally, Annis' house-made version of the beloved Twinkie will fill an obvious void in 2013.

Still going strong: “Sliders — and all their variations — were very popular last year, and we were able to upsell them as late night snacks, hors d'oeuvre and even whole stations,” Annis says. “That will continue.”

On its way in: When it comes to food in L.A., it's all about the street. “I see a continuation of the cross-culture food fusion of simple, everyday, handheld snack or street foods,” says CEO Richard Mooney. “Today, we're more likely to have a taco station featuring Korean bulgogi and kimchee. Sriracha sauce is becoming as common as ketchup, and any self-respecting French fry bar must have aioli and dips featuring not just the aforementioned sriracha, but everything from yuzu to rajas made of chiles from remote Mexican provinces.”

Mooney notes that less-structured dining environments and grazing buffets will continue to be on the rise in 2013. “Guests want the freedom to move around and avoid having to have a relationship with a place setting,” he says. That being said, food presentation will loosen up as well. “We are trending towards a more casual feeling, a more organic kind of style,” he says, such as “wooden planks with foods that look like they just arrived from a local garden set up in a more family-style setting.”

Still going strong: “Kale — which was something that, until recently, was used just as a garnish — will not be a passing phase,” Mooney says. “Like quinoa, it's here to stay.”

Events Industry Carries On Together Through COVID-19
Mar 23, 2020