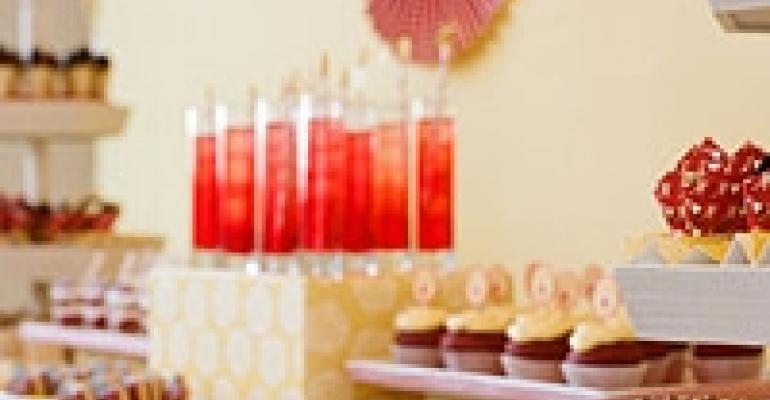 From high-style buffets to grown-up versions of childhood favorites, caterers dish on trends in dessert menus.

“We saw a void in the market for high-end custom dessert buffets, specifically on the West Coast,” says Ashley Capra, vice president of sales and marketing for Paula LeDuc Fine Catering, Emeryville, Calif. “We knew that something so stylized would sell to the client who wants something truly extraordinary.” A definite add-on service, Capra admits that the labor-intensive buffets appeal to a small yet viable percentage of their client base — a good majority of them brides.

So far, the catering company typically produces about eight buffets a year, which this year included a vintage circus-themed affair for the ISES Northern California Chapter's annual gala. Among the tabletop decor, which incorporated bird cages, vintage circus memorabilia and an attendant dressed as a ringmaster, were such retro-inspired favorites as Key lime pie in custom paper cones, cinnamon-caramel corn in mini custom popcorn boxes, red velvet snowballs rolled in coconut and garnished with confetti flower petals, and shortbread cookies embossed with vintage circus images printed on edible paper. “There is a fine line between making sure the food is within a certain color palette, that it works well visually and that it still tastes delicious,” Capra says.

On the corporate side, Chicago's Blue Plate Catering also has seen a growing interest in the high-end dessert buffet. For an upcoming holiday event for retailer Nordstrom, the company will create several different dessert buffets, each themed around a current food trend — bacon, herbal, retro and doughnuts among them.

Sometimes, however, the original treat you remember from childhood is best left dry. “The most popular dessert in my catalogue would probably be the ‘Take Five,’ which is an ode to my favorite candy bar,” says Caringal, who combines chocolate cheesecake, a pretzel crust, peanut butter ganache, peanuts, salted caramel and a dark chocolate shell in her re-creation. Another twist on an old favorite: “push-cakes,” in which push-pop vessels hold mini layer cakes in sophisticated flavors such as lemon-lavender and chocolate-cappuccino. House-made ice cream is another big seller. “When it comes to flavors, the sky is the limit,” she says, noting that Cracker Jack and buttered popcorn are just as tasty frozen.

When it comes to “it” ingredients, good old-fashioned cotton candy has given bacon a run for its money, appearing atop everything from foie gras to Cosmopolitans. Finesse Cuisine brings it closer to its confectionary roots with a sweet-savory dessert bite of bubble gum-flavored cotton candy wrapped around a cherry filled with blue cheese.

The complete version of this article appears in the September-October issue of Special Events. The magazine is free to ISES members; subscriptions can also be ordered here.

The Keys for Event Pros to Stand Out from the Competition
Jul 01, 2020