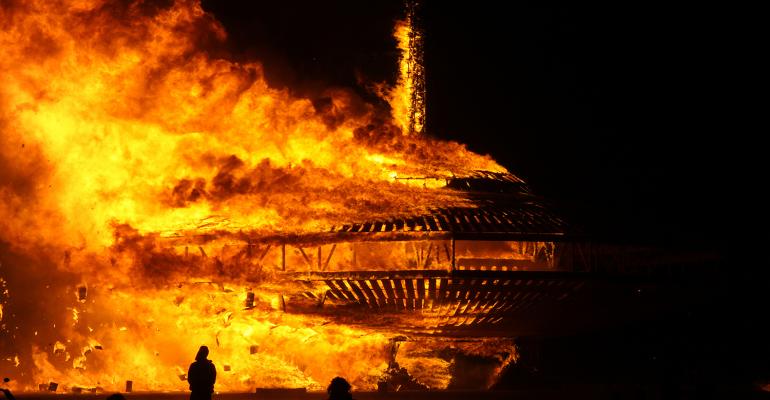 Attendee Dies at Burning Man after Running into Flames

A man runs past security into the fire--and his death--at Burning Man.

In a freak development, an attendee at the famed Burning Man event died Saturday after he ran into a fire. The “global culture movement”—which organizers say “is not a festival”-- encourages attendees to be creative and collaborative, and includes the burning of a 40-foot effigy. Other attendees have tried running into the blaze before, the Sacramento Bee reports, but this is the first known death:

A 41-year-old man who died after rushing into a Burning Man blaze Saturday night was on his first trip to the festival, according to his parents … Nevada’s Pershing County Sheriff Jerry Allen said doctors confirmed [the man] wasn’t under the influence of alcohol, but a toxicology report is pending.

“We don’t know if it was intentional on his part or if it was just kind of induced by drugs. We’re not sure of that yet,” Allen said.

More than 70,000 people attended the nine-day Burning Man art and music celebration in the Black Rock Desert, about 100 miles north of Reno. The festival culminates with the burning of a towering 40-foot effigy made of wood, a symbol of rebirth, which usually happens the Saturday before the Labor Day holiday. It’s followed by the burning of a temple on Sunday before the festivities wrap up Monday …

Attendees have tried before to run into the flames while the man is burning and there have been reported injuries from people trying to get a piece of the spectacle as a token and going through the hot coals. Allen said it’s a problem that the organizers have tried to contain by having their own rangers stage a human-chain to prevent people from getting to the fire. Allen said that this is the first time someone has gotten through like this and the only fatality that he’s aware of in his 15 years with the county … Sacramento Bee

Are Your Events Safe? Safeguarding for a Successful and Secure Event
Sep 20, 2016