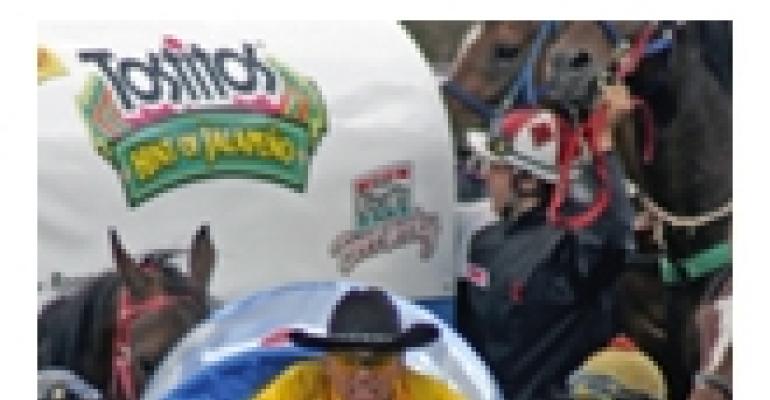 WITH their longevity, civic spirit and allure for attendees, city fairs and festivals offer many attractions to organizations seeking exposure. But mere wows and crowds are not incentive enough in today's results-oriented sponsorship market. That's why successful city events are creating unique branding and communication opportunities that spotlight sponsors while speaking to the masses.

A hefty purse — $1.6 Million this year — helps the Calgary Stampede's world-renowned rodeo round up cowboys and cowgirls from the world over. But the annual celebration — which dates back to 1912 — also offers a range of tempting opportunities to sponsors large and small. According to sponsorship manager Catherine McCleary, the 430 organizations that take advantage of these opportunities do so for one of two reasons: “to participate or to promote.”

The promotion side draws some of the event's largest sponsors, many with a national or even global presence. These include Coca-Cola, which hosts a stage on the grounds of Stampede Park that features some of Canada's hottest music acts — including singer Nelly Furtado at this year's event. Thanks to the Stampede's policy of granting “supply exclusivity” to the major sponsors in each product category, the beverage company also provides all of Stampede's soft drinks, from bottled water to cola. Due to Coca-Cola's market ubiquity, the Stampede in turn receives “exposure in a retail environment where we wouldn't have the ability to purchase that exposure,” McCleary notes.

On the altruistic side of sponsorship are organizations with more civic-minded aspirations. These may be small businesses that throw their weight behind one of Stampede's many all-volunteer-supported committees. Or they may be groups such as the Alberta Beef Producers, which — while they “don't have a direct link with consumers; you can't go out and buy a cow,” says McCleary — do have a message to communicate to Stampede's masses. The ABP, for example, joins in Stampede's “Ag-tivity in the City” program, which McCleary describes as “an impressive tent in the park where families, kids and people of all ages can walk through and find out about the food they eat.” So while the beef producers may not be selling steaks, they are making the most of their exposure to many of the festival's 1.2 million attendees by “sharing information about something they believe in,” McCleary says.

Ultimately, no matter why an organization supports the Calgary Stampede, she notes, sponsorship is a community service. “Any level of involvement helps make up the fabric of what Calgary is,” McCleary says. “You can't draw the line between where Stampede ends and the community of Calgary begins.”

SEA AND BE SEEN

At Seattle's month-long Seafair, each sponsorship is a custom job. As director of sponsorships and promotions Joan Ogle puts it: “We don't do gold, silver and bronze levels or anything like that. We really pride ourselves on providing packages based on a client's goals — we listen to those goals and help our clients meet them.”

For title sponsor Chevrolet, meeting goals means meeting members of the car-buying market. Seafair makes those members available through a custom sponsorship it has created for the automaker in conjunction with the festival's popular hydroplane race event. The centerpiece of the sponsorship is a Chevrolet car display where many of the race's 300,000 attendees “crawl in and out of Chevrolet cars,” Ogle says. All the while, she notes, Chevrolet salespeople are interacting with potential customers. On top of that, “enter-to-win” contests at the car show provide “consumer data and generate leads, so that salespeople can reach out to people in the future,” she adds.

With Chevrolet sponsoring the annual race and bringing in such high-profile elements as a VIP area and trophy presentation, the event merits a seven-hour live television broadcast, expanding Seafair's exposure exponentially. “It's a good example of a 360-degree campaign,” Ogle states.

Sponsors with smaller budgets can still have a large presence at Seafair, Ogle contends. For instance, a new company or small business might make the most of the festival's torchlight parade by offering up employees to loft a giant, fully branded helium balloon. “They go in front of a crowd of 300,000, and people really cheer for them,” Ogle says. Plus, with Seattle's local news station covering the event, these sponsors “reach another 800,000,” she adds.

While custom sponsorships require more creativity and effort than standard sign-and-banner packages, they are a must in today's tough marketing market, Ogle maintains. “Budgets are tighter out there in the corporate world, and {sponsors} are being held to more aggressive results,” she says. “On my side, that means we have to be smarter about the programs we put together because they really have to hit their goals and help our clients sleep at night.” With her team shifting its focus to custom packages in the past few years, “We've been able to keep sponsors happy and keep them coming back at a 90 percent renewal rate,” she says.

When people think of glamorous Los Angeles, a county fair with its Tilt-A-Whirls and prize pigs may not immediately come to mind. But, in fact, the Los Angeles County Fair is one of the country's largest, with more than 1.3 Million people attending the 18-day event. With such hefty numbers, the fair, held each September at L.A.'s Fairplex event complex in Pomona, Calif., Is a natural draw for companies seeking exposure to attendees from across the vast county.

One of those companies, the Toyota brand — a major fair sponsor as well as its official vehicle — gets the most out of its fair involvement by venturing beyond Fairplex's bounds. The carmaker gets all the usual coverage in the fair's program and daily “Fun Guides,” says L.A. County Fair communications manager Wendy Talarico. It also boosts its profile with a big branded display stretching along the event's main thoroughfare. But much of Toyota's exposure — as well as the fair's — comes in the form of a unique fleet of attention-grabbing cars. As Talarico explains, Toyota “provides us with vehicles we ‘wrap’ with advertisements for the fair. They drive those out around communities in southern California, promoting the fair throughout the summer.” With the vehicles' bright orange and green branding, the drive-about offers “exposure to their cars, as well as to the fair.”

And it's precisely that exposure exchange that Talarico touts as the L.A. County Fair's most effective use of sponsor relationships. “From the sponsor's point of view, we bring 1.3 million through our gates each year. That's their brand exposure,” she notes. “But at same time, our brand is strengthened by the brands we bring in, like Coca-Cola, Ralph's {supermarkets}, Farmers Insurance.”

Not only does the fair benefit from the “linking” of the event's brand to its sponsor's brands, Talarico says, but, “a lot of times there's advertising they will do, and that's money we don't have to spend.” Promotions, too, such as this year's offer by Toyota of free fair tickets to any customer who brings his or her vehicle to a dealer for service, also add to the event's overall success. According to Talarico, “There are benefits to both sides. It's not just the sponsorship fee.”