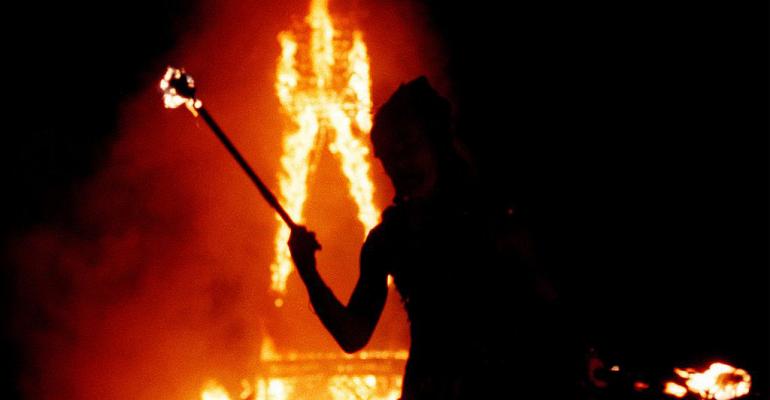 The enigmatic Burning Man event is so revered for its radical creativity that some corporations are now paying for employees to attend.

It sure isn’t corn dogs and tractor pulls. The enigmatic Burning Man event—which celebrates community and “radical” self-expression—now draws some 70,000 souls to the scorching Nevada desert every year. Burning Man has become such a symbol of innovation that some companies are now paying for employees to attend, says the L.A. Times:

When heading to Burning Man, the nine-day bacchanal-cum-art installation in the Nevada desert, people tend to bring along their friends, lovers or drinking buddies. Others go with their co-workers--and they expense it.

Shane Metcalf, co-founder and chief culture officer of 15Five, this year decided to let employees at his software company who had never been to Burning Man file the $425 tickets on their expense reports. The idea, he said, is to help foster creativity and community at work.

The festivities have been formative for him. “What are the things that have contributed to our own heroes’ journey?” is the question he recalls discussing with his co-founder, Chief Executive David Hassell. “Burning Man is one,” he said, adding that it allowed them to cultivate an “integrated, authentic self expression.” Thus was born the reimbursed-tickets plan.

Although many companies in the San Francisco Bay Area resign themselves to lowered output and high levels of employee absence this time of year, a few are encouraging their staff to hit the Playa, as regulars call the stretch of desert where the 60,000-person event takes place through Sept. 3. Sometimes, it’s essentially mandatory … Los Angeles Times

Larry Harvey of Burning Man: An Appreciation
May 03, 2018

Attendee Dies at Burning Man after Running into Flames
Sep 05, 2017