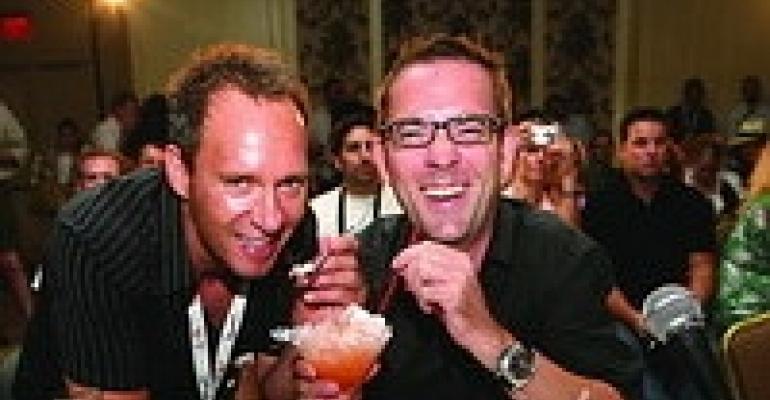 If you want to see a prize-winning pig, don't attend any of the festivals described here. While county fairs have plenty to offer — nobody is knocking farm-fresh jam — some festivals now have surprisingly sophisticated spins. Instead of attracting locals alone, these modern, edgy festivals draw guests willing to travel across the country, and sometimes across an ocean, just to see them.

EVERYONE WILL DRINK TO THAT

When 12,000 people descend on your city for cocktails, you'd better supply a lot of ice. Three thousand pounds, to be exact. In its sixth year, Tales of the Cocktail welcomes amateur and expert mixologists — among them, plenty of bartenders — to New Orleans' historic Hotel Monteleone for five days of libation education in July. Events include the popular Cocktail Hour, which features authors of cocktail books and their favorite classic and contemporary drinks accompanied by spirit-spiked food.

This year, festival organizers have turned to innovative, of-the-moment marketing techniques to capture the attention of the largely Generation X crowd. In April, organizers arranged for 25 top cocktail bloggers to select festival presenters who interested them. The Tales of the Cocktail team connected the pairs, resulting in interviews posted on the blogs, spreading the word about the festival on the Internet. Bloggers also will be treated to their own reception, and the festival has its own blog as well — at www.talesblog.com — featuring guest writers. This year, podcasts will provide coverage during the event too, aired on the cocktail-centric www.smallscreennetwork.com.

Despite the global reach, the festival is a local event first and foremost, capturing the spirit of the renowned cocktail and food culture of New Orleans, notes founder Ann R. Tuennerman. “I believe that locals must love your event first and have pride in it, and then they will tell people about it,” she says.

What started as an event to promote healing after the 2001 attacks on the World Trade Center in New York has turned into a 400,000-person-strong celebration of the best celluloid has to offer. Started in 2001 with the help of co-founder and actor Robert De Niro, the Tribeca Film Festival gave Manhattan an economic and cultural boost sorely needed after the attacks. Since then, the four-day affair has grown into a two-week extravaganza. This year's event, held in April, brought out filmmakers and film-lovers from around the world for a festival featuring 121 feature films and 79 shorts from 41 countries in movie theaters all over Manhattan. The longest attendee journey belonged to Palden Gyatso — the subject of a documentary shown at the festival — who traveled 13 hours by bus from Damsala to New Delhi, India, then 18 hours by plane to New York.

While musical performances by up-and-comers bring out “the 20-somethings in droves,” according to Nancy Schafer, co-executive director, “the festival is attended by and geared for all ages, just like films are.” Festival organizers make sure at least 10 percent of films are appropriate for families, and a “Family Festival” day stretches across 10 blocks of Greenwich Street and its side streets.

But the festival's most popular activity award goes to the Tribeca Drive-in, which features three free nights of movies outside the World Financial Center. Each night brings as many as 8,000 film fans to see a broad range of movies. This year, the drive-in featured “We Are Marshall,” which won the Tribeca/ESPN “Fans' Favorite Football Flick” in an online tourney-style competition where fans voted for their favorites. Another night, moviegoers enjoyed the music video and documentary “Thriller Night: Thriller & the Making of Thriller,” recounting the story behind superstar Michael Jackson's groundbreaking 1983 music video. Pre-show live interactive entertainment included a Michael Jackson look-alike contest, zombie face-painting and “Thriller” dance lessons, resulting in viewers-as-zombies with all the right moves ready to participate in the world's largest zombie disco. As Schafer says, the drive-in is “a great way to show independent and studio films, new and old, to everyone, at no cost.”

Never seen a 26-foot temporary illuminated glacier? San Jose, Calif.'s A Global Festival of Art on the Edge, sponsored by nonprofit Zero1, could change that. The purpose of the June festival, according to artistic director Steve Dietz, is “to present the best work from around the world at the intersection of art and technology” in downtown San Jose's museums and surrounding areas. The five-day festival, now in its second year, saw 20,000 attendees its first year and primarily attracts guests aged 19 to 29, though families aren't forgotten. Big retailer Target sponsors a day of music and interactive art exhibits for them, such as a “Do-it-yourself Orchestra,” which invites six participants to use turntables to record music together.

As for the festival's artwork, it's “very often participatory; it's interactive,” Dietz notes. “It uses the tools you carry around in your pocket or use at home, like cell phones and computers.” For example, a computer-based piece entitled “Global Mind Radar/Reader” includes a virtual character who reacts to a projection of emotionally charged blog topics. Viewers can text in blog requests in real time and watch the character react.

Not surprisingly, a festival with a technological bent relies on technology as a marketing tool. In fact, a third of the festival's attendees discovered the festival online, according to Dietz. He considers the Web and social networking sites to be the “heart and soul” of the festival. The event has a page on the social network group Facebook, and organizers work with photo-sharing site Flickr and user-generated video site YouTube, where artwork from the festival can be viewed.

The festival itself is much like the artwork. As Dietz says: “We're about the contemporary world around us.” He adds, there's a “‘this is the moment’ aspect.”