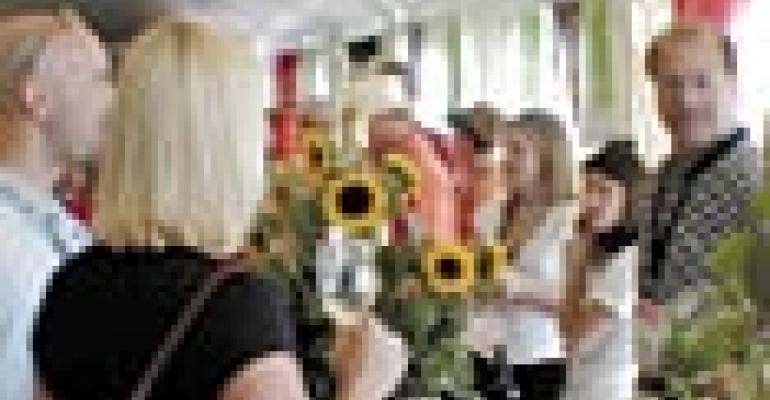 Festivals: A Great Time For The Good Things

Showcases of art, music, and food and wine, cultural festivals remain a powerful draw in a rapidly evolving event industry. But while much about the pleasure of festivals has stayed the same for decades, event experts know that festival production must adapt to today's crowd-control, setup and security demands.

“The absolute who's who in the international food and wine world” is how producer Devin Padgett describes attendees of the annual Food & Wine Classic at Aspen. And Padgett should know — the former chef has been working on Food & Wine Magazine's signature event for 15 of its 21 years.

During that time, he says, he's seen what started off as a “quiet June escape” to Aspen, Colo., for food and wine industry members evolve into “a huge consumer and trade program.” Still, he contends, the event is not about plugging product — “You can't buy things here,” he notes — but about “networking, and bringing the magazine to life.”

Taking place over three days in June, the Classic features more than 80 seminars, draws about 5,000 food and wine professionals and aficionados, and involves the efforts of 900 volunteers, according to Padgett. High-profile presenters include such notables as chefs Bobby Flay and Charlie Trotter and wine expert Danny Meyer. For the production, more than 85,000 square feet of tented space is installed in Aspen's Wagner Park, and 11 of the mountain town's off-site venues host educational programs, including the Classic Cookoff — a festival highlight, according to Padgett.

In his many years with the event, Padgett says much about operations has remained consistent. For instance, each year demands that setup crew adhere to a “quick in and quick out.” This year, Padgett adds, teardown was especially impressive: “Within 24 hours of having 3,500 people in Wagner Park, there were kids back in the park playing Frisbee.”

The Classic also has seen the advantage of sticking with experienced vendors that have become familiar with the event's specific needs, Padgett notes. Among these, he counts power provider Aggreko, which has served the event with portable electricity for the past eight years.

But, like just about everything else in the world of events, some elements of the Classic have had to change with changing times. The most significant of these, Padgett says, is security. “When I first came on 15 years ago, there was volunteer security, and very little of it,” he recounts. By contrast, this year was the first that the event brought on a full-scale professional security operation — and it won't be going back to non-pro, he insists.

Despite the changes, though, Padgett says the event still gets its charm from an intimate feel — the result of capping attendance at 5,000 in 1996. Opting to stay small and remain in Aspen instead of moving to larger digs, “We haven't been able to get any bigger, only better,” he says.

For the first time this June, attendees to the Lakefront Festival of the Arts in Milwaukee had the freedom to wear fancy footwear, John Schlueter says. The president of Oak Creek, Wis.-based Karl's Event Rental, which has been tenting the 41-year-old festival for the past six years, explains that keeping guests' shoes out of the mud was just one advantage of the venerable event's move to a brand-new site.

Prompted by unpredictable weather that often left the event's previous location on the shore of Lake Michigan a sodden mess, the move to grounds surrounding the Milwaukee Art Museum has proven a popular change, Schlueter says. Attendance at this year's event hit 60,000 — up 20 percent from last year, he notes.

The move to a new site also meant switching from stake tents, which would have required his crew to drill holes in the museum grounds' concrete, to more pavement-friendly clear-spans, he explains. He says he used a crew of about 30 staff total, separated into two 12-hour shifts, to set up the 60,000 square feet of Losberger structures.

Besides providing a better backdrop for lighting the exhibits of 160 world-renowned artists, the taut clear-spans made it easier to contend with sudden weather. With the old stake tents, “getting that sidewall up when the winds kicked up was time-consuming,” Schlueter says. “With our clear-spans, all the sides are keder … you could just pull them closed.” Quick closure is no small concern, he adds, noting that gales had reached 40 miles per hour during setup the day before this year's festival began. Had the winds continued, or had good weather taken a turn for the worse during the festival, “artists didn't have to worry about flapping tops and sidewalls moving around,” he says. “Using clear-spans guaranteed that they were going to have great conditions to show their product.”

Concepcion himself has been devoted to the event since 1979, when he first worked the festival as a security guard. These days, he counts the event among seven festivals he works on in conjunction with the Mayor's Office of Special Events.

Joining forces with the city's internal event office has been a boon for his business, Concepcion explains. For starters, “The city plays a big role in coordinating city services,” he says. Unlike with private events, electricians, police and firefighters are part of the package when producing the jazz festival in Chicago's Grant Park, Petrillo Music Shell and surrounding streets — all public spaces.

Also, Concepcion can count on the city to warehouse temporary fencing, signs, ticket-booths and beverage-service equipment for the festival, making it possible to operate without excessive overhead, he says.

Most significantly, he notes, the jazz festival, from a business standpoint, is an “evergreen event.” Because Ravenswood has a contract to collaborate on the event year after year, “We were able to weather the most recent recession,” Concepcion says. The repeat business of an annual public event also means that Ravenswood can create a stable, ongoing schedule, which has allowed the company to take on more annual events, including the New Year's ball it helps orchestrate at Navy Pier every year for Chicago-based client Big Creek Productions.

Concepcion admits that timeless annual events and large-scale festival production aren't for every event company. But for him, the consistency of the enterprise is a comfort. “When I started working on the jazz festival, I became close friends with the group of people that were in my section,” he says. “I still see them to this day, 24 years later — the same people, their extended families, they know me well.”