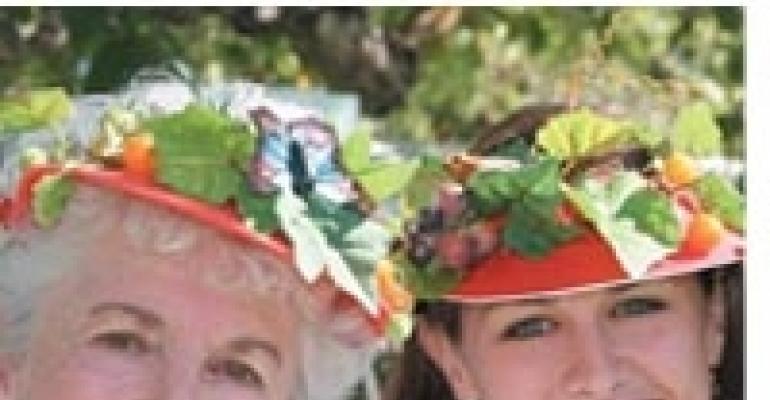 Festivals bring crowds — and sometimes the more focused the festival, the better. Take onions, tomatoes, garlic or bourbon, mix them into a slew of activities, and you have an event rich with enthusiastic attendees.

A gardener's fondness for heirloom tomatoes provided the beginnings of the Kendall-Jackson Heirloom Tomato Festival in Fulton, Calif. Originally, the winery's 2.5-acre garden housed the festival, which consisted of a few 8-foot tables and a few hundred people. “Now it is held on our 80-by-400-foot event lawn and spills over into just about every corner of the property,” says Mark Matthewson, director of hospitality at the winery. Last year the event, which takes place the first Saturday after Labor Day, welcomed 2,800 attendees. A tent houses 175 varieties of heirloom tomatoes for attendees to sample while food purveyors feature the fruit in such dishes as lobster and heirloom tomato bisque and sun-dried tomato cotton candy.

Some festival features have taken on a life of their own. Bruschetta Boulevard showcases various bruschettas developed by winery chefs to pair with wines. The activity's “original intention was to take a bit of pressure off of the sponsor food vendors, but it has become one of the more popular attractions,” Matthewson says. Another favorite is the cook-off between four of the top 10 best new chefs featured in Food & Wine magazine, who have five minutes to plan a menu with heirloom tomatoes and a surprise protein.

While onions often are viewed as entree additions rather than center-of-the-plate stars, the onion takes center stage at the Whalers Village Maui Onion Festival in Lahaina, Hawaii. About 5,000 participants make their way to the festival the first weekend in August for a series of onion-centric activities purposely planned during the height of summer travel.

Onion rings abound at this event — 900 pounds were fried up last year — but some festival-goers eat them raw as well. The Raw Maui Onion-Eating Contest is a favorite activity because visitors “get charged up watching people munch on the onions!” says marketing manager Lisa Donlon. But attendees learn lessons at the festival too. The farmers who grow the onions are on hand to talk with guests, who have become increasingly interested in the agriculture side of the produce.

Sixteen years ago residents of Bardstown, Ky., decided they wanted to host a fall event — their brainchild, the Kentucky Bourbon Festival, now spans six days, hosts 52,000 guests and keeps growing. Two new activities are added each year to the event, held the third week in September, and any activity that doesn't make money in three years is eliminated. And sponsorships are easy to obtain with so many bourbon distilleries nearby. The Barton brand sponsors the popular horse-drawn trolley, and like other sponsors and their respective events, has rights to first refusal of that event next year. Another bit of planning that executive director Pam Gover is thankful for is having one all-inclusive caterer for all events, who was selected through a bidding process many years ago. “It makes life so much easier,” she notes.

Activities run from playful and family-friendly to sophisticated and spirit-filled. And special care is taken to avoid underage drinking. Closed-off areas house activities featuring alcohol consumption, and tickets to enter these areas, as well as off-duty policemen in uniform, keep things in check. The festival's signature adult event is the black-tie Great Kentucky Bourbon Tasting and Gala, which has grown from 250 attendees to 1,200. There, participants can taste bourbon from all distilleries in the state and then enjoy a night of dinner and dancing. Family-friendly fare includes a bourbon barrel-rolling contest, which features distillery workers who “actually do this for a living — you still have to roll barrels into ware-houses,” Gover says. Professionals roll 500-pound barrels toward a marked spot in a test of speed and accuracy, “but it's not for just anybody to go up and try — they'd get hurt!” Gover adds.

THE SWEET SMELL OF SUCCESS

Garlic's famous pungency doesn't deter crowds. The Gilroy Garlic Festival in California, held the last weekend in July, has grown from a simple luncheon in 1978 to a destination that lured 90,280 attendees in 2006. The event hosts old-school events as well as modern activities. Every year a Garlic Festival Queen is crowned, who performs a skit or song about garlic. The Garlic Idol talent competition, inspired by “American Idol,” is a new addition, aimed to entertain teenagers.

Not surprisingly, garlic is the focus of the food. It can be found in 100 percent of the offerings in outdoor kitchen Gourmet Alley. There, attendees can taste everything from garlic rattlesnake to garlic ice cream, yet president of the festival Judy Lazarus' favorite is the pepper steak sandwich, marinated by unusual means: mops dipped in garlic butter “because it's such a huge undertaking,” Lazarus says. Another festival favorite is the Pyro Chefs, known for sky-high fiery flame-ups while cooking garlicky calamari and scampi. And garlic breath is no concern for attendees, Lazarus notes, because “everybody smells the same.”