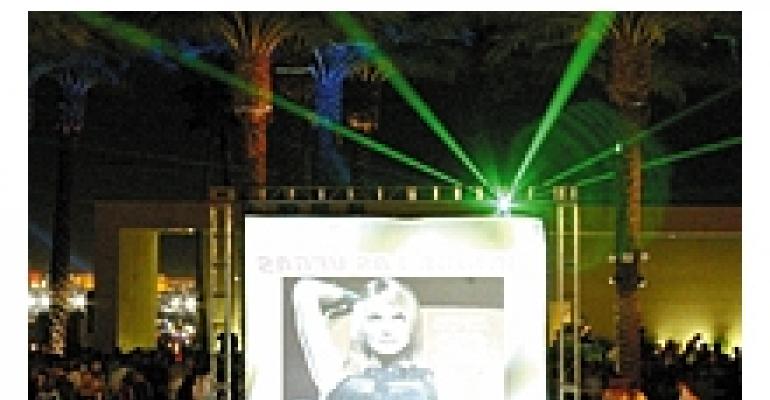 The sights! The sounds! The thrill of it all! Pyrotechnic and special effects experts offer exciting new innovations and advice on using them to best effect.

TIP: Set off a media blitz.

While single effects are cool on their own, effects pack a bigger punch in packages. That's the word from Jeff Ward of Los Angeles-based TLC Creative Special Effects, who says his company is “expert at techniques of combining laser light and video to create never-before-seen visual effects.”

Noting that combined media projections can either be used as a focus of a show or simply as “animated decor,” Ward explains the technological advances that have made such effects a reality. “Innovations in laser scanning have made it possible to combine the sharpness and vitality of lasers with the full picture of video,” he says. In addition, technologies such as laser raster and real-time laser graphic manipulation “have opened the door to a new way of presenting laser graphics projection in registration with video,” he adds. “When this effect is layered into video presentations, the audience is treated to something they have never seen.”

Ward uses the example of the recent Adam Sandler movie “Click,” for which TLC was hired to create a futuristic wedding scene. The company designed a “futuristic and visually stunning” scenic backdrop using animated graphics and swirling laser projections, Ward says. “Any event that needs to create the future now can benefit from these projection techniques.”

Such events may range from intimate corporate meetings to large-scale parties, where “high-tech projection effects can provide a kind of video-scaping, washing huge areas with fire, ice, space {motifs} — the idea slate is infinite,” Ward notes. Wherever TLC's latest projection technology is applied, he adds, “The integration of video and laser light as animated decor helps bring direct attention to any branding or theme by making it something that leaves a lasting impression.”

TIP: Get your head on straight.

Once upon a time, different event effects could be created only by using different machines. Not anymore, according to Gary Crawford of Lynnwood, Wash.-based CITC.

With French manufacturer Universal-Effects' new equipment line, for which CITC is the exclusive U.S. distributor, a range of effects including snow, bubbles, rain and confetti are possible with a simple change of a fan head, Crawford says. “This is a brand-new, economical, user-friendly way to create several different effects using only one {fan} base,” he states. Crawford notes that the new line, which premiered at the ETS-LDI show in November, is “perfect for venues that use various effects at different times during a show,” such as nightclubs, amusement parks, theaters and concert venues.

As for those technicians tasked with transforming event environments through use of the versatile equipment, there is the added advantage of “less is more,” Crawford says. Not only can techs create multiple effects without “an entire arsenal of machines,” but the new line also offers “a brilliant idea for areas where there is not enough storage for several effects machines,” he adds. “For road shows, this is a great breakthrough.”

Then there's the speed factor. With the new single-base machines, a rapid change of fan head enables a change of effect almost instantly. On top of that, “the distance of the effect can also be varied by changing the size of the bases” — another quick move. And with most machines in the line featuring on-board DMX — technology enabling the unit to interface with a computer — effects may be programmed for high speed and high impact.

For event planners, CITC's new equipment offers a way to give clients new options. “You no longer need to decide on simply one effects machine,” Crawford says. “Begin with bubbles, continue with evaporating snow, end with confetti — all with the same base.”

Hot at events from public festivals to private fêtes, pyro packs a special-effects wallop. And fireworks are undoubtedly the pyro trick that soars above the rest. So what to do if your event calls for the flash of fireworks but lacks sufficient space? You could call on Miami Shores, Fla.-based veteran pyrotechnics provider Add Fire to make cakes a part of your party.

The humbly named “cake” is essentially a cardboard box filled with cardboard tubes, each of which holds a “star,” such as the kind that appear to shower down from an exploded overhead firework. Add Fire president Ted Walker calls cakes a breakthrough in fireworks technology. With their diminutive size, which requires “less pyrotechnic product to launch and less inside the device,” Walker says, cakes allow for a fireworks wow in small spaces and within much closer range of event attendees than traditional fireworks. Based on the clusters of multiple Roman candle-type devices he and his colleagues in the business used to cobble together in a pinch — and now made under stringent quality-control standards by fireworks manufacturers who eventually caught on to the demand — cakes are launched from the ground and provide an immediate effect upon launch, Walker explains.

He notes that Add Fire can provide 20- or 30-minute-long pyro shows using cakes alone and can create a show in a space as limited as a small parking lot or rooftop site. Wherever the event, pyro veteran Walker says experience has taught him one very important lesson about the “when” of fireworks: “It's better to do fireworks earlier in the evening for events than at the end. Why get them all excited and then send them home? Get them excited, and then let them party!”