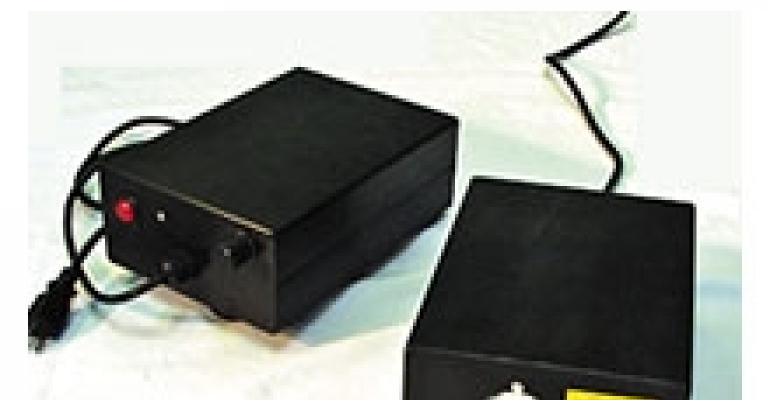 THE latest crop of special effects requires a minimum of specialized skill to effect maximum impact. Using such user-friendly technologies as LED lighting and DMX controls, these effects are peerless for turning even the most ho-hum hall into a wow-worthy wonderland.

There's nothing more spectacular than a star-filled night sky — and now there's no easier way to bring the night sky indoors than with the StarMaze. So says Jeff Ward of Los Angeles-based TLC, which introduced the effect-maker at LDI 2006.

A stand-alone projector that measures less than 6 inches wide and weighs in at under 5 pounds, the StarMaze “creates a fantastic display of light” that includes “myriads of shining points of laser light and a soft blue nebula of breathtaking beauty,” according to Ward. And one projector can do so on a scale of up to 30 by 30 feet, making the StarMaze ideal for filling tent ceilings and ballroom walls, he notes.

But what really makes the StarMaze such a sensation is its ability to create a dynamic night-sky effect easily and inexpensively. “It's so simple, we could probably send a two-year-old chimpanzee in to {operate} it,” Ward says. “It's just plug and play.” And because it requires only a light-colored material as a projection surface — stretched spandex is ideal, Ward notes, but tent walls or hard walls will do just fine — the StarMaze can be used just about anywhere.

Need color-changing lighting but concerned about the woes of wires? Bronx, N.Y.-based City Theatrical can create the desired effect with its PDS-50 — a “battery-operated LED lighting fixture with wireless DMX control that allows users to put color-changing lighting anywhere and have it operate for up to 12 hours,” says the company's Andrew Nikel.

Launched in 2005, the PDS-50 uses City Theatrical's patent-pending wireless data system (WDS) to transmit data signals from the user's DMX controller to the lighting unit. According to Nikel, “Any DMX console can be plugged into one of our transmitters,” enabling the console user to control light color and intensity, whether with pre-recorded cues or via live programming on site.

Mirage launched the most recent version of its WaterScrim early last year after an extensive design and development effort focused on “making the overall system more responsive in cue-intensive environments, particularly corporate theatrical situations,” Ritt says. Instan-taneous response to cues — “especially the tricky on/off/on cues, which are challenging from a water-control standpoint,” according to Ritt — is now possible.

Exclusive to the new system is the curtain effect port, which allows the screen to be parted from the center, and “opened” or “closed” like a theatrical curtain, Ritt says. Also new to the V5-T is the HydroPulse option, which produces waves and lateral pulsations and patterns in the water screen that can be set to a rhythm or controlled via DMX.

Always in pursuit of special effects innovation, Mirage developed “the world's most powerful and largest outdoor water screen system” last year, according to Ritt. And scheduled for launch in May is Mirage's moving fountain head technology, which “melds robotics and H2O into the next wave” to create a brand-new showstopper in the corporate-event effects repertoire, Ritt says. “Wait till you see this stuff!”