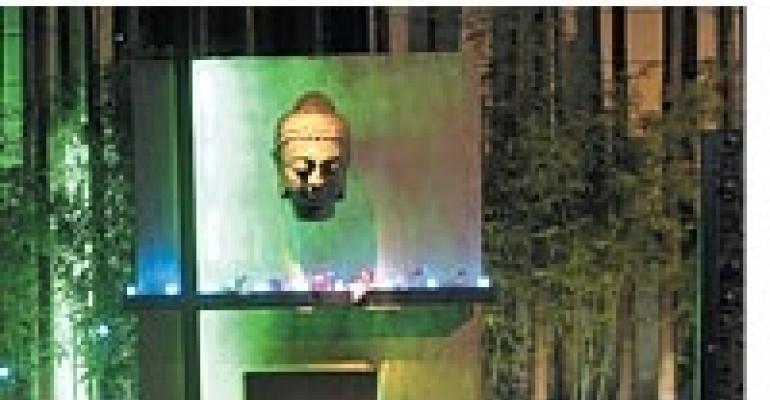 A wedding calls for floral, fine food and a fabulous white dress, but bright lights bring more personality to the party. It's only in the past few years that wedding clients have come to see the power of brilliant lighting, says Ira Levy of New York-based Levy Lighting. An awe-worthy atmosphere is crucial for a couple's special day. “You bring in decor because you want this day to look different than other days,” Levy says. “When you bring in lighting it adds to that feeling — right away when you walk in.” Levy's lights shone on a Hollywood producer's bicoastal wedding this January — the ceremony took place in New York, and the new couple celebrated with a second party in Los Angeles.

For the intimate East Coast ceremony, the event team — including New York-based celebrity designer Preston Bailey and wedding planner Jennifer Zabinski of New York's The Wedding Library — decided to stage the vows at Manhattan's Astra restaurant. The space's view of the landmark 59th Street Bridge made it perfect for immersing out-of-town guests in Big Apple ambiance. “They wanted a New York feel, with a view of the buildings and the bridge,” Levy says. For the ceremony's lighting scheme, Levy worked with Bailey's decadent flower designs. “Bailey has a style where he takes these translucent screens and he prints a silkscreen on them and he backlights them,” Levy says. “So I said, ‘Let's try something different.’”

The fresh take on flowers featured a large screen with projections of moving, digitally enhanced floral. Created by a video graphic artist, the cartoon blooms were a composite of peonies, daffodils and carnations, Levy explains. While the pastoral image of swaying white flowers certainly said romance, it wasn't a walk in the park to create. Since the bride and groom taking their vows in front of the screen couldn't be awash with projection, Levy had to rear-project onto the panel. “So we had a tent built over this little terrace area, and we projected onto the screen from the back,” Levy says.

The 60-person ceremony, followed by dinner, and the large reception in Los Angeles at celebrity-heavy restaurant Koi used lots of wireless, battery-powered lights. Since “Both locations were in standard places where we couldn't make large power tie-ins, we could only use wall outlets,” Levy says. So fluorescent lights served as high-impact, low-power solutions. While Levy acknowledges that fluorescents can be “office-y,” he says the colored lamps along with gel sleeves made the party perfect. “We used them in a way that was pleasing for people and the atmosphere,” he says. “It was a warm and comfortable feeling.”

The event team accented Koi with a lounge set along a pond and Buddha figures. A-list celebrities walked across projections of Persian carpets. “Because the whole lounge thing is very popular now with events, we decided to put a different spin on it,” Levy says.

A couple's big day deserves bright lights, according to Levy. “Some spaces don't even have lighting,” he says. “Just basic down lighting but nothing to tell people that this is something different, this is something special.”