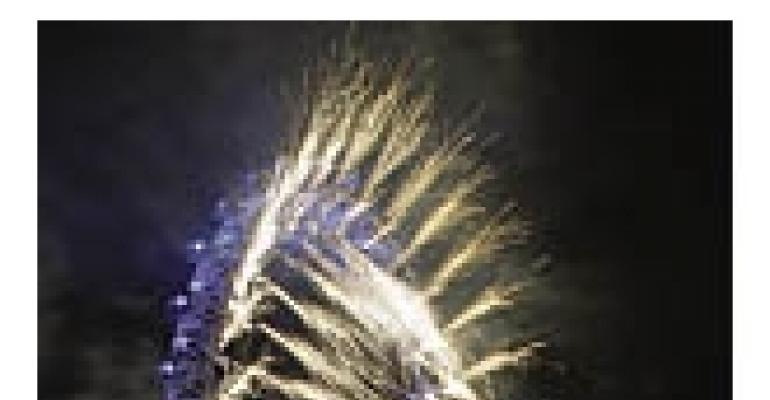 TRAPPING EXPLOSIVES TO a landmark may not seem like an appropriate way to celebrate New Year's Eve, especially in a city vying to host the 2012 Olympics. But the Greater London Authority decided to do just that for its New Year's Eve extravaganza.

The event began at 6:30 p.m. on New Year's Eve with images projected 325 feet tall by 10 feet wide onto a building behind the Eye on the South Bank of the Thames. To create what he calls a “gallery experience” for the crowds gathering for the fireworks at midnight, JMW creative director Dan Colborne assembled iconic images of London, including the “green man” symbol from road crossings, Chinese lanterns from London's Chinatown, and a sign from a fish-and-chips shop. More than 30 images were projected for 15 minutes each onto a 26-story high-rise; after a security guard ran around closing all the window blinds, the white, rectangular building became a perfect screen. Colborne also used the opportunity to boost London's bid to host the Olympic Games; the projections included sporting pictures and, Colborne says, “We used colors that were representative of the Olympic rings, and consulted with the 2012 committee to include ‘Back the Bid’ images.”

Colborne used 8 PIGI Xenon 6KW projectors mounted inside a truck parked on the South Bank. To light the Eye, Marenghi placed MAC 2000s inside each of the 32 pods on the Eye, 14 Syncrolights searchlights at the bottom of the Eye, and 100 Vari-Lite VL5 arcs on pontoons moored on the river. Because tourists were riding the Eye during the day, all the equipment had to be moved on for nighttime testing and off again in the early morning. The MAC 2000s were strapped onto flight cases and wheeled on and off, three pods at a time. The Vari-Lites were secured on a barge beneath the Eye. The crew had to wait until it closed for the evening so the team could drive the truck in and begin focusing. “We were testing at 1 o'clock in the morning in freezing cold temperatures,” Colborne says.

Because the crowd all needed to hear London's Big Ben strike midnight at the same time, Colborne used a Delta sound system to relay the chimes along Victoria Embankment.

At the last moment the GLA decided to hold a two-minute silence to remember the victims of the Asian tsunami, which had struck only five days before. Because the images were still, the program was flexible, and the collection of photographs already included a suitable choice. “We already had in the show an image of three candles [from a London church] and we just put that up for the two-minute silence,” Colborne recalls. “All the lights went down on the Eye, and the crowd was absolutely silent. It was an amazing moment.”

Berthonneau designed the fireworks to launch off the Eye like a stationary Catherine wheel, but “explode” within the camera frame for the benefit of the live TV audience, rather than rocketing upwards and away from the structure. This meant that the smoke remained within the camera frame as well, a potential problem for Marenghi. “We had to be careful which direction we came in at the Eye so we didn't lose it in the smoke,” he says. “If we were front-lighting the Eye from the Vari-Lights on the pontoon, we were always in purples, reds and blues; bright colors would have lit up the smoke and made the Eye disappear.”