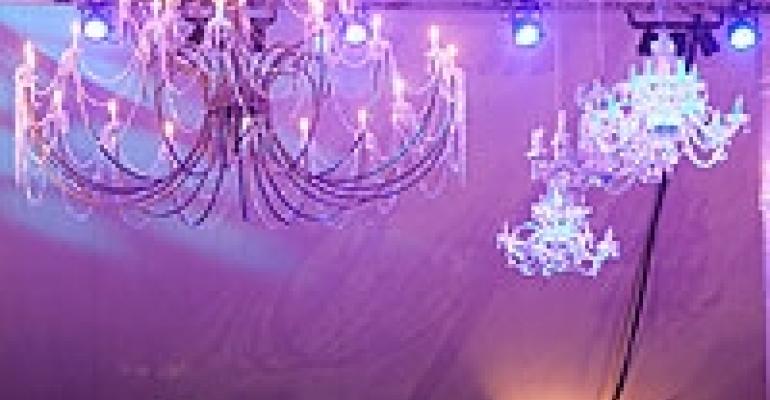 Known as much for its clever, pun-filled themes (including “Hollywood & Vines,” “Rock & Roar” and “Zoodio 54”) as it is for the charity it supports, this year's Zoo Ball, titled “The Great Catsby,” combined big cats with big entertainment for an evening benefitting Chicago's Lincoln Park Zoo. “We wanted a fun, colorful, sophisticated summer party, and a theme that would incorporate animals,” says Cynthia Ross Polayes, co-chair of the Women's Board of Lincoln Park Zoo. “We loved putting the spotlight on some of our favorite animals at the zoo — cats.”

To that end, the zoo was set with a series of tents, including the Leopard Lounge, aptly situated across from the Lion House, where guests enjoyed cocktails and passed hors d'oeuvre including Maryland crab cakes with lemon caper remoulade and a petite summer galette with fresh peaches, gorgonzola and balsamic syrup. Designed in colorful variations of leopard prints — such as punchy pinks and bright greens — the lounge led the way to the silent auction and dining tents, which were more “Gatsby” than “Catsby,” with twinkling lights and lush hydrangea-filled centerpieces in shades of blue, green and pink created by Chicago-based Event Creative. Appropriately, a lion's roar signaled guests to be seated in the reception tent for a three-course, sit-down dinner catered by J&L Catering.

Though the gala was a roaring success — raising more than $1 million for the zoo — a freak summer storm the afternoon of the event presented a lion's share of setup challenges. At about 3 p.m., a microburst storm hit the zoo grounds, with high winds and heavy rain. “About two-thirds of the linens had to be switched out because they were soaked, dining tables had to be cleared and reset, and the entire silent auction signage had to be reprinted,” says Ross Polayes. “That the ball happened at all is a testament to all of our fabulous vendors, who pulled together with the zoo staff to make it happen in the nick of time.”