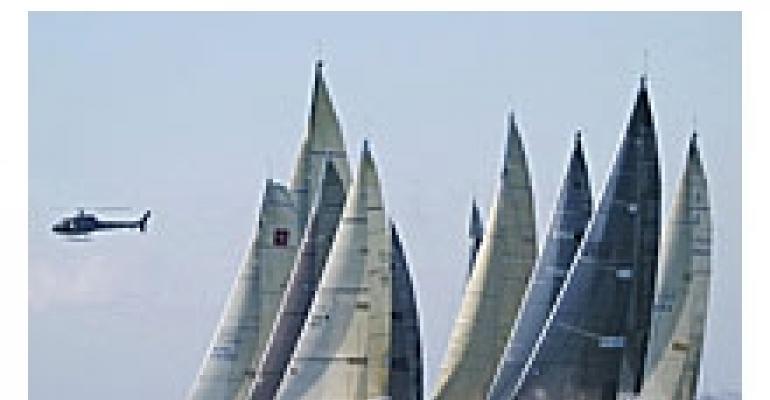 SETTING SAIL FOR A CAUSE

WHEN Janis Dinwiddie, owner of Newport Beach, Calif.-based Dinwiddie Events, came aboard as producer for the First Team Real Estate Invitational Regatta fund-raiser, she knew the event needed to make waves to reel in donor dollars. Designed to help Newport Beach's Hoag Hospital Heart and Vascular Institute, the first-time benefit had a boatload of challenges. The May event's concept was a regatta featuring some 20 48- to 90-foot racing yachts competing in a three-day race off the Newport coast. “Everyone doing a fund-raiser does the usual dinners or golf tournaments, but we wanted to do something unique,” Dinwiddie explains, “to raise funds for Hoag Hospital by featuring one of the prominent elements of the Newport area, which is the boating community.”

Finding support for the charity event in the boat-loving coastal community was an easy task — more than 200 volunteers helped out. But as with any fund-raiser, creating sponsorship opportunities to bring in money was a major challenge. “Normally at any spectator event there are sky boxes and hospitality areas that can be sponsored,” Dinwiddie says, “but as this was ocean yacht racing, there was no way to create a space where people could get an up-close view from the shore.” To solve the problem, the event team created two sponsorship levels to allow donors to get closer to the action. The first used large, donated powerboats as “floating sky boxes” that took spectators out to the edge of the ocean racecourse. The second gave sponsors the chance for one person to ride along on the yachts during the regatta. The thrilling experience was “similar to being allowed to sit in the passenger seat of an Indianapolis 500 race car,” she notes.

In addition to the regatta, the fund-raising weekend featured a full lineup of post-race events, including a gala dinner for 400 held at the Balboa Bay Club & Resort. Originally planned as a formal soiree, the party switched to a more-casual affair in keeping with the nautical theme. “Sailors don't like to dress up” Dinwiddie says with a laugh, “so we figured [if it were] black-tie, people would show up in tuxedos and flip-flops.” Guests bid on auction items such as a Segway and a five-night stay in a private Scottish castle to raise more money for the cause.

All told, the weekend brought in $250,000 for the hospital and ensured that the event will return in 2007, thanks to the exposure that the race received. “Hoag had a wonderful response,” Dinwiddie says. “They generated a lot of funds, and the community really got involved.”