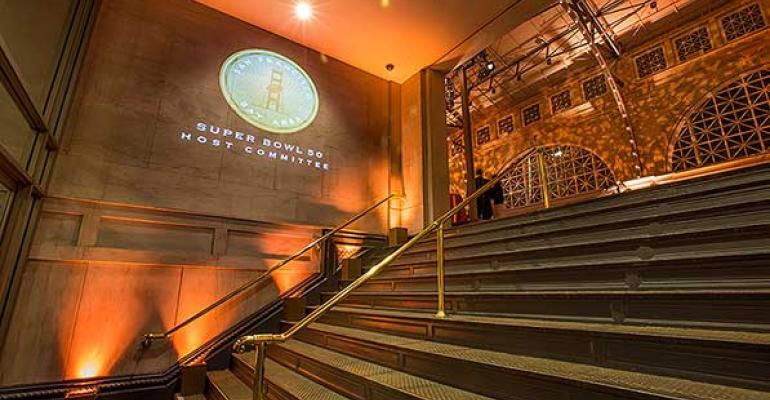 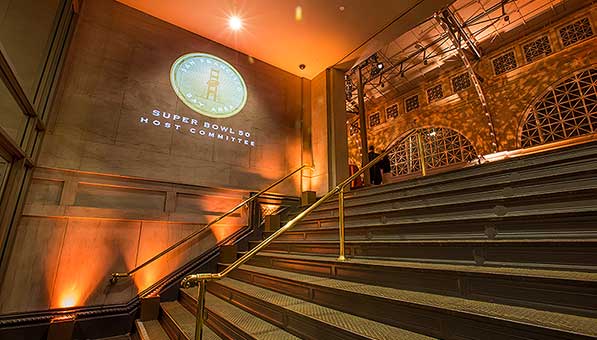 Kick-off for Super Bowl 50 is still three days away, but the hoopla surrounding the mega-game has had event pros in the greater San Francisco Bay area scrambling to handle business for months. The big game will pit the Denver Broncos against the Carolina Panthers in Levi's Stadium in Santa Clara, Calif., on Sunday.

"We have an array of events from Jan. 31 to Feb. 8 that are all related to the Super Bowl," notes senior partner Stephen Denison. "The Super Bowl represents a seven-figure sales bump. Percentage-wise, the added $1 million in business to our $30 million in annual sales is not huge, but it's a nice bump."

Super Bowl events on the McCalls roster range from marquee corporate events to parties for NFL Legends, the NFL Players Association and the Players Trust, as well as the San Francisco Host Committee Golden Gala, he adds, with guest counts ranging from 200 to 3,000 people per event.

McCalls staffing will bump up too. "With about 650 waiter shifts and the support activity in our warehouse, floral studio and production kitchen, we're looking at over 1,000 shifts for our people," notes McCalls partner Kirsty Gumina.

Not only does Super Bowl bring good business, but it comes at a good time, says McCalls CEO Dan McCall.

"The Super Bowl is a huge boost to local businesses and comes at the perfect time--right after a busy holiday season and right before the spring social season," McCall says. "Having this event here just represents more of what we do at McCalls and what San Francisco offers as a destination city, and we all are happy to do it." 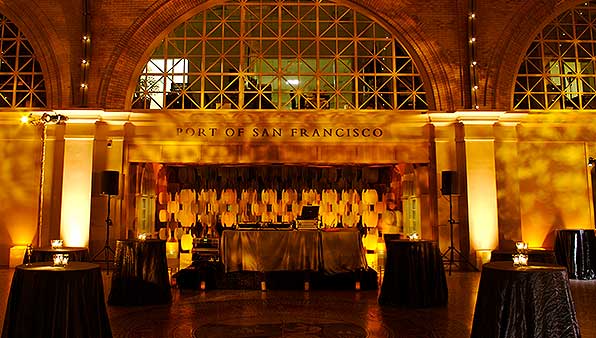 "The opportunity to host Super Bowl 50 brings with it a week-long celebration in which the entire Bay Area is full of events," says Ryan Brown, general manager for Classic Event and Tent Rentals, San Francisco.

Although February is typically a busy month for his office, "We have seen a 50 percent boost in top-line revenue due to Super Bowl-related events," he says.

And although some locals had been watching to see if hometown hero Tom Brady—quarterback for the New England Patriots and a native of nearby San Mateo ,Calif.—would make an appearance in the game, his team's defeat in the AFC title game hasn't put the kibosh on any events, Brown says.

Bring on the 'Bronco Orange' The Super Bowl events are bringing out the best in the Classic team's design talents, Brown says. "Having some of the most creative event consultants in the industry in San Francisco, our production and creativity meetings have been even that much more exciting with the Super Bowl in town. We are excited to showcase custom bars, fabric goal posts--as well as airport hangar walls covered with our 'Bronco orange' wall drape."

Loving San Francisco--Traffic and All 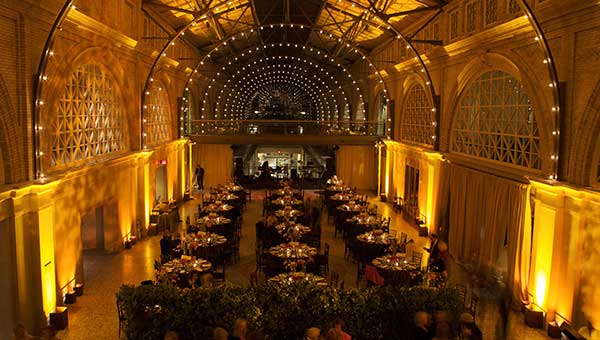 A big challenge for event pros—and everyone in San Francisco—has been the street closures and detours in the city, which starting taking effect Jan. 23. Nine days of activities leading up to the big game include the NFL Experience and Super Bowl City.

"Our deliveries will definitely affected by the zoning," says Samantha Sackler, CEO of Los Angeles-based Designer8. "However, we anticipated these difficulties and got the appropriate credentials back in December. We really had to have a grid, plan and timeline set for our deliveries and ensure that we had enough labor to handle everything. Although the city is doing its best to keep traffic issues to a minimum, at this point it’s more of a logistic puzzle to get from point A to point B."

But local event pros will take on the traffic for the chance to serve the events.

"The beginning of the year is typically a quieter time in the events industry, but with the excitement of Super Bowl 50, our operations have heated up with preparations for the big game," says Jon Retsky, co-owner of san Francisco-based Got Light, which just won a Special Events Gala Award for its lighting work.

"Got Light is lighting up private celebratory parties for incoming NFL owners, coaches and players throughout iconic San Francisco locations. Corporate celebrations leading up to the big game are also being thrown throughout the San Francisco Bay Area," he says.

Retsky adds, "We are thrilled to be part of the excitement as Super Bowl 50’s viewing audience falls in love with San Francisco all over again!”