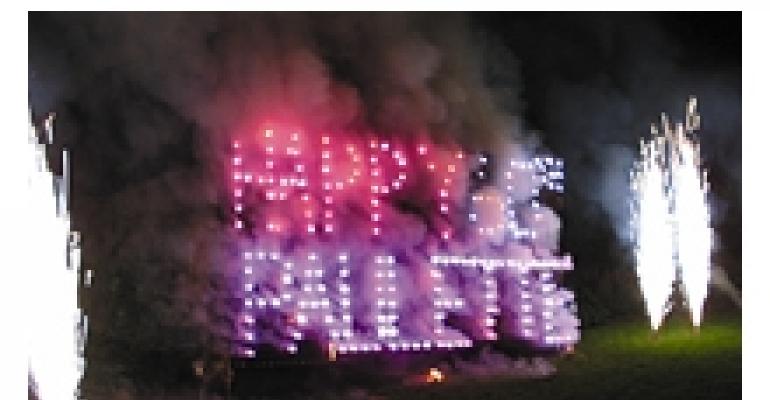 TIP: When space is sparse, small fireworks can make a big impression.

Alysha DiGiorgio, pyrotechnician and director of sales and marketing at Digital Lightning in Kensington, Md., notes that the most important factor in determining the type of fireworks that can be used is the size of the event site.

“A lot of people want fireworks for a wedding, but their event location doesn't have enough space for large displays,” she explains. “We have to follow NFPA {National Fire Protection Agency} rule 1123, which governs outdoor aerial fireworks.” According to that rule, there has to be 70 feet in each direction from the shoot site for every inch diameter of shell; therefore, a 3-inch shell requires 210 feet in each direction. When an event site doesn't provide enough space on land, a possible alternative — if there is water nearby — is using a barge as a launch site. However, “Using a barge is a lot more expensive — a lot of times a bride and groom can afford a land-based show, but not a barge show,” DiGiorgio notes. “To rent the barge and tugboat often costs two times the cost of the fireworks themselves.”

Getting creative with the type of fireworks used is another option. “We did a show at a wedding in a backyard where the couple didn't have a lot of room, but they really wanted fireworks,” she recalls. Digital Lightning was able to do a “class C show” using consumer fireworks. “We picked effects that were one inch or smaller, and we did a choreographed show using consumer fireworks.” Another popular effect is a “set piece” — a pyrotechnic effect where individual fireworks are glued to a lightweight bamboo or reed frame in the shape of letters or a company logo. “It's a great effect to start or end a show,” DiGiorgio says.

TIP: When space is sparse, small fireworks can make a big impression.

“Many people think that using fireworks as a grand finale to an event is their natural place, but this isn't true,” says Ted Walker, president of Add Fire in Miami Shores, Fla. “The earlier in the event, the better. Why wait until the end, get everyone excited, and send them home?”

Walker cites weddings as an example of how to make an impact sooner rather than later. “The absolute best time is as the couple are pronounced husband and wife — when they turn to kiss, the sky fires up,” he says. “When we have done this, the audience has jumped to their feet, cheered and clapped. Then the reception was incredibly energetic.”

The element of surprise also makes a big impact. “There are two essential elements to a good show,” Walker says. “First, only the key personnel should know the details, and they should be sworn to secrecy. The second is to move the audience to the best viewing area using another {pretext}. Place a lecturer with their back to the fireworks area. Or after dinner, move the audience to the waterfront for dessert. Not knowing when the show will take place adds to the magic of the evening.”

Add Fire is currently developing a wireless firing system that will “increase levels of safety, reduce cost of firing systems, reduce setup time, ease choreographic setup, and increase show and design flexibility,” Walker says. With the system, Add Fire will be able to do simultaneous firing of multiple locations at the same time, Walker says. “This is exciting — it means that within a 3-mile radius of our firing system, we could shoot any number of sites at the same time, and each show could have a different theme, timing or music,” he notes.

TIP: Choose shell quantity over size to get more bang for the buck.

David Spear, CSEP, president of Classic Effects in Mandeville, La., says he's seeing a movement in the industry toward reducing the number of large shells being used in fireworks displays. “It's not universal, but it seems that more displays are using greater percentages of medium-sized and smaller fireworks, and not as many of the really big shells,” he explains. The larger shells go higher in the air and create a larger firework, but with government regulations and other factors that have arisen since 9/11, “We're almost discouraged from using the big ones,” Spear says. Not using the large shells doesn't mean a less impressive show, though. “Because the large shells are proportionally so much more expensive, not using them means we can put a lot more medium-sized ones in the air,” he explains. “It might make the difference between putting up 400 shells in the air and putting up 450 to 500. This results in a longer display or a more intense display with quicker pacing, because you have more shells to use during the show. In a perfect world, it's a combination of longer duration and quicker pacing.”

Whatever size display they choose to go with, Spear notes that planners need to protect themselves by ensuring that the fireworks company they select is properly insured. “I can't stress enough the need to address insurance when hiring a fireworks company,” he says. “Just as in every industry, there are good contractors and there are those that will try to cut corners.” The two key things to look for are general liability insurance to cover injuries or damage to property, and workers' compensation insurance that covers the fireworks company's employees. “You want to see the certificate of insurance that gives evidence of the coverage — when you get that certificate, let someone who knows the business see it,” Spears advises. “Send it to your own insurance agent or risk manager to look it over and make sure it's adequate.”