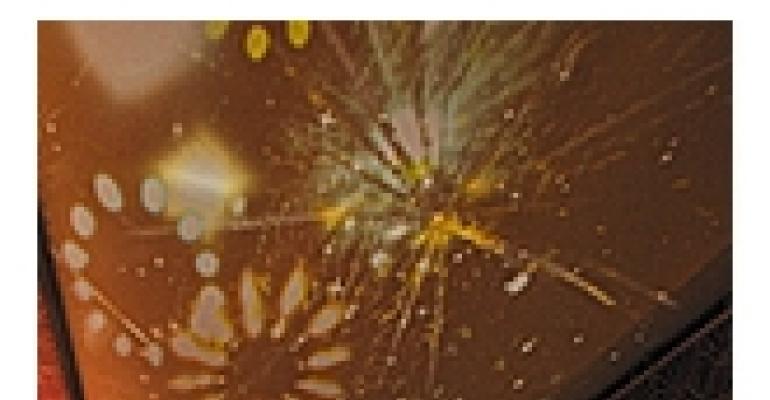 IT was only fitting that the lighting at the Nobel Prize awards banquet should shine, considering the luminaries in attendance. The 1,400 guests at the December ceremony included members of the Swedish royal family, international politicians and Nobel Prize winners — innovators in fields ranging from medicine to literature. With that in mind, Stockholm, Sweden-based Spectra Stage & Event Technologies, which supplied creative design, production management services, and lighting and audiovisual equipment for the event, created a lighting concept that kept the focus on the honorees while highlighting the grandeur of the occasion.

Providing design inspiration — and challenges — was the venue, the Blue Hall in Stockholm's City Hall, an expansive space with a balcony circling the perimeter. Lighting designer Per Sundin reined in the space by lighting the floor and lower parts of the walls with warmer tones. “Despite its name, the Blue Hall is built mostly with red brick stones so without decorations and special lighting, it's kind of an indoor piazza,” he explains. It was also important that lighting equipment reflect the prestige of the ceremony. “It's a somber event, and we really wanted to hide or integrate the equipment as much as possible,” says Ola Melzig, Spectra's production manager. “Per wanted to light the sculpted walls behind the balcony, and he wanted something that could change color. Since this was the way the royal family, the Nobel laureates and other dignitaries entered and exited the event, I needed to find a fixture that was not only able to change colors, but also had an attractive design, a great punch and was totally silent.” Fourteen Wybron Nexera 575 Wash fixtures “met all our expectations,” he says.

The highlight of the design was a series of digital projections on the ceiling of the venue — including cloud formations, flowers, a star-filled sky and a fireworks display that went off as the royal family left the room at the end of the ceremony — created using High End Systems' brand-new Catalyst Version 4 digital media server. Sundin also incorporated the event's “Floral Transformations” theme into his design. “Every year the banquet has a new theme; this year it was flowers, Nordic light and Swedish choir music” provided by the 40-member Allmanna Sangen choir, he notes. The evening's entertainment was divided into three acts, with each performance accompanied by a custom projection on the ceiling. For the third act, the Blue Hall lived up to its name with a wash of blue lighting and a dark-blue night sky ceiling projection as the choir sang a jojk, a traditional Swedish folk song. During the choir's grand finale flower parade, the Spectra team used four Syncrolite SXB 5/2 spotlights positioned behind the choir to simulate the sun streaming through windows, illuminating the entire space — a fitting end to a ceremony celebrating the world's brightest minds.