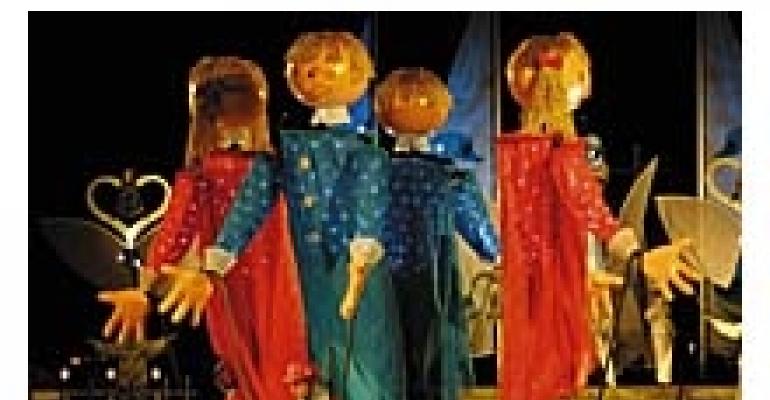 ONCE UPON A (SHOW) TIME

DEALING with snow queens, witches and mermaids is not part of many job descriptions, but for Bettina Buckley, chief effects orchestrator at Clermont, Fla.-based Wow!Works, working with these characters became a full-time affair. Early this year, the Tivoli Gardens theme park in Copenhagen, Denmark, asked Wow!Works to produce Tivoli's contribution to the countrywide celebration of the 200th birthday of beloved Danish author Hans Christian Andersen. After meeting with Tivoli organizers, Buckley and show producer Gary Paben planned a production that would highlight both Andersen's accomplishments and the enchanting park setting. The show, named “A Tivoli Fairytale,” premiered in early May and ran for six nights a week through the park's season closing at the end of September.

For the show, Wow!Works worked with a team that included both American and Danish talent. “It was very important to us that we had a blended design and creative team,” Buckley explains. Accommodating the cultural differences between the two countries made selecting the 10 fairy tales featured in the show a key project. Thanks to Andersen's wealth of tales, there was no shortage of material, but “we wanted to pick stories that are popular from the Danish perspective, not the American one,” she says. “There are certain stories, like ‘The Little Mermaid,’ that are popular in both countries, but some that are big in Denmark most Americans may not have heard before.”

Creating the oversized puppet costumes worn by some of the show's 56 performers also challenged the producers. The production's outdoor park setting, capable of accommodating thousands of people each night, meant that the puppets had to be large enough for viewers sitting far from the stage to see. “We had some new technologies we played around with because we needed to have dimensionalized heads and hands,” Buckley explains. The finished puppets, which were between 14 feet and 18 feet tall, “weighed anywhere from 35 to 50 pounds, so everything we put on those puppets had to be as light as possible.” The puppets also had to be able to withstand the show's special effects, including lights on the costumes to make them stand out during the nighttime performances. “In ‘The Tinderbox,’ the witch puppeteer wears a pencil fogger, and smoke comes out of the puppet's fingers,” Buckley notes. “There are bubbles for ‘The Little Mermaid,’ snow for ‘The Snow Queen’ and a pyrotechnics finale.”

The large-scale production may have had plenty of larger-than-life elements, but also allowed viewers to get close to the action, thanks to a performer procession through the crowd during the show, Buckley explains. “This was a big, grand show, but we wanted to make sure it was suitable for Tivoli, which is such a special setting. It needed to be charming, intimate and spectacular at the same time, and I think we accomplished that.”