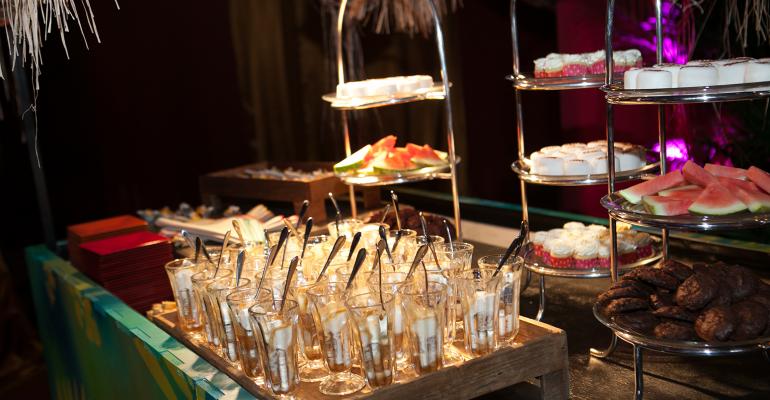 Variety is the Spice of Bar, Bat Mitzvah Menus

From comfort foods to ethnic eats, today’s teens know what they like—and that means just about everything.

Whether well-traveled or simply gastronomically adventurous, children’s palates seem to be expanding beyond traditional ethnic fare such as tacos and sushi.

“It seems like there are no limits to our clients’ requests for ‘fusion’ menus,” says Andrew Gerstel, CEO of Washington-based Windows Catering Co. He says it is not unusual for a client to combine Latin American, Italian, French, German, American and Asian cuisines all in one menu. “This is due in large part to the fact that children are being exposed to a greater variety of foods and they’ve incorporated their ethnic favorites into their regular diet,” he notes.

In the same vein, the popularity of street food, which is typically ethnic by nature, has made its way onto the mitzvah menu. Wendy Pashman, president of Chicago’s Entertaining Co., and her team, which included Chicago-based Kehoe Designs, recently created an urban street food-themed menu for a bar mitzvah that incorporated custom-built store kiosks for each cuisine. For example, the “Cluck Stop” turned out Jamaican jerk chicken skewers, chicken tikka, Korean chicken wings and Buffalo wings, while the “B’Witched” pressed sandwich station offered Cuban sandwiches and Greek lamb gyros in pita.

At Chicago-based Paulette Wolf Events, the ever popular food truck theme is an ideal vehicle for delivering ethnic bites, notes CEO Jodi Wolf. Favorites include a Hawaiian poke “truck” where guests can choose between three bowls based around rice or greens with ahi, albacore or salmon dressed with assorted toppings.

“Generally, we always do a separate menu for the kids and the adults, though sometimes a teen with very sophisticated palate will request all adult food,” Pashman says. “But we have seen instances where this has failed because not all friends are up to that level.”

At Someone’s in the Kitchen of Reseda, Calif., mini grilled cheese sandwiches paired with tomato soup, mac and cheese cups, mini hot dogs in puff pastry, and fried chicken with waffles are must-haves. At Windows Catering, Gerstel and his team find great success with their baseball stadium- and carnival-themed fare, which includes sophisticated takes on childhood standards such as sunflower seed-crusted chicken tenders, meatball parmigiana sliders, build-your-own cheesesteaks, and a Rice-a-Roni bar with customizable add-ins.

DYNAMIC DESSERTS Bar mitzvahs are about kids, after all, so it’s no surprise that dessert holds a prominent place on the table—or, in some cases, on the wall. “When it comes to sweets, bigger is better,” says Cheryl Fish, vice president of design services at Someone’s in the Kitchen. And by “big,” she means everything from giant candy walls and mannequins festooned with cotton candy wigs to made-to-order super-sized milk shakes and build-your-own pie bars. “The more outrageous, the better,” adds Fish, who notes that flaming doughnut stations, doughnut walls, and nitro ice cream bars “always create buzz”—along with one great sugar high!

See the full story in the Summer issue of Special Events. Not a subscriber? We can fix that—just click here.